LeGarrette Blount had a 21-yard touchdown run in Super Bowl LII, though he did admit this week that he was a bit salty not to be part of the most iconic touchdown in the Philadelphia Eagles 41-33 victory over the New England Patriots.

As the Eagles practiced what would eventually be known as "The Philly Special" in the week leading up to the Super Bowl, Blount unsuccessfully lobbied the coaching staff to get a chance to be part of the trick play.

"During the week, when we first started running that play, Corey Clement was already in the backfield for it, and I was asking them 'Can I do it?' for the longest [time] and they wouldn't let me run it once, not even in practice. It was messed up," Blount said with a chuckle to Jon Marks and Ike Reese on SportsRadio 94 WIP.

Instead, Blount had to settle for a front-row view of one of the most legendary plays in NFL history.

Considering he was on the sideline, Blount saw from a distance the brief sideline discussion between Nick Foles and Doug Pederson, where the game's eventual MVP suggested to run the play on fourth-and-goal in the second quarter. Blount didn't hear the exchange between the two - which has become classic in its own right - but when he was informed of what play was to come, he was impressed with how bold the team was.

"I was kind of surprised," Blount admitted. "I was close enough to see them talk about it, but I didn't know what the play was. Then I asked 'What do we got here?' And they were like 'Philly, Philly.' And I'm like 'Oh yeah, this is tough.' That was the first thing in my mind, because no one expects that. No one expects the quarterback to go out for a pass, even though it gets done a lot these days."

In the video below, you can see Blount walk towards Pederson on the sideline, trying to figure out what the play call it is. After he gets an answer, he doesn't say much of anything, he just proceeds to watch the play unfold: 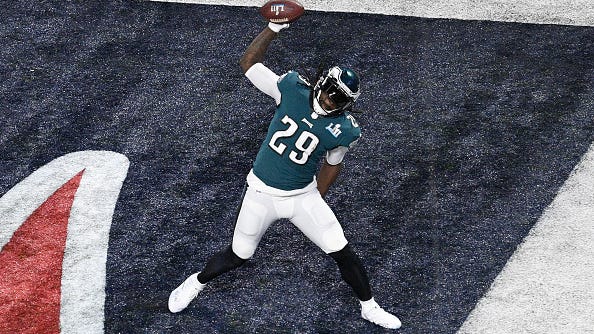 LeGarrette Blount: Duce would be a great leader for Eagles

news
Seed-planting season: What home gardeners need to know
music
Lady Gaga's stolen dogs have been returned unharmed
1thing
1Thing: What does it mean to be eco-friendly?
1thing
3 reasons why you should choose organic tea
music
Maren Morris and Ryan Hurd on ‘Chasing After You,’ and chasing 1-year-old Hayes around the house
music
Taylor Swift tells fans she 'cannot reschedule' tour dates