Deebo Samuel is back, and no matter who is under center in San Francisco, the second-year wideout is someone whose dynamic play style and central role in the offense makes him a must-have in fantasy football.

Yes, the absence of Brandon Aiyuk and George Kittle helped, but 11 catches for 133 yards is a remarkable stat line no matter the circumstances. And with Kittle sidelined for the foreseeable future, I have to think that Samuel's role as a target hog in the offense will continue going forward.

In short, I'm telling you to pick up Deebo Samuel in your fantasy leagues if he's available. The problem is that he's available in 44 percent of Yahoo leagues and 39 percent of ESPN leagues, and for the purposes of this weekly column, a player needs to be available in at least half of leagues in order to be included. So, while Samuel, Cole Beasley and some other solid names won't appear below, this doesn't mean you shouldn't snatch them up if they're available. In fact, consider yourself lucky if they are available.

But, as usual, the five names below are all owned in fewer than 50 percent of fantasy leagues and can play a big role on your rosters going forward.

All stats retrieved from Pro Football Reference and Fantasy Pros. 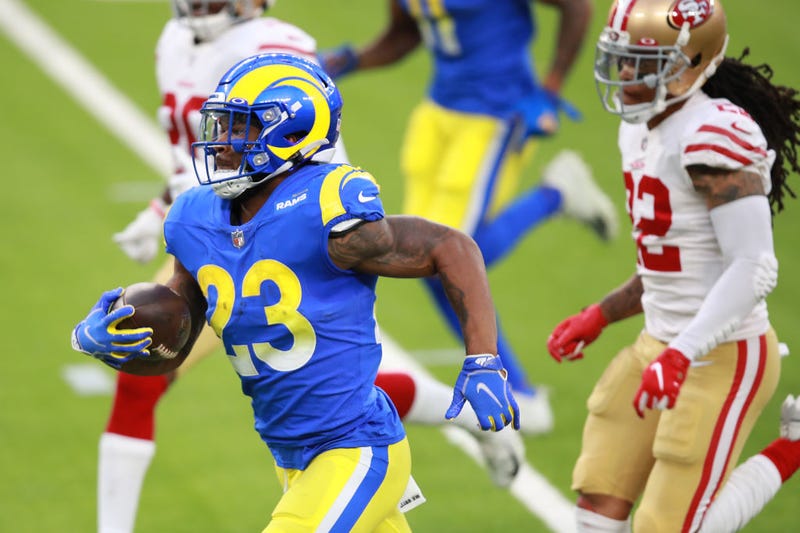 Cam Akers sprints ahead for a long run against the 49ers. Photo credit (Joe Scarnici/Getty Images)

Let's take another spin on the Rams' running back carousel... a-ha! This time, it landed on rookie Cam Akers, whose 61-yard run was perhaps the best play we've seen out of the LA backfield this year.

But is he really the Rams back to own? No. That label doesn't exist, considering this committee is as prominent as ever and it doesn't seem as though anyone is making major headway as the lead runner. However, with the position hit so heavily by injuries and other factors, it's worth stashing anyone who could possibly be an impact running back going forward.

We have concrete evidence that Akers is more than capable, and so another strong week where he largely outperforms Darryl Henderson and Malcolm Brown makes him an extremely valuable asset for your fantasy team's playoff run. 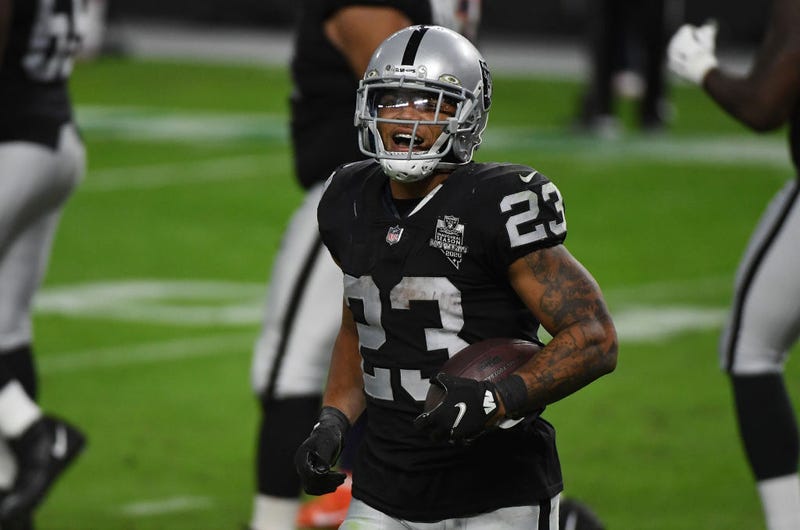 With Jacobs suffering an ankle injury that could force him to miss time and a juicy matchup against the New York Jets on the horizon in Week 13, Booker becomes an awesome option and a potential fantasy RB1 given a full workload in what should be a very favorable fantasy day. Then again, Week 12 was anything but favorable for the Raiders but, given their play this season, I'm willing to chalk that up as one of 2020 football's many anomalies.

Monitor Jacobs' injury status and be willing to commit a solid chunk of your remaining FAAB to Booker if you need a running back and/or are on the cusp of the playoffs heading into Week 13 — he could save your season. 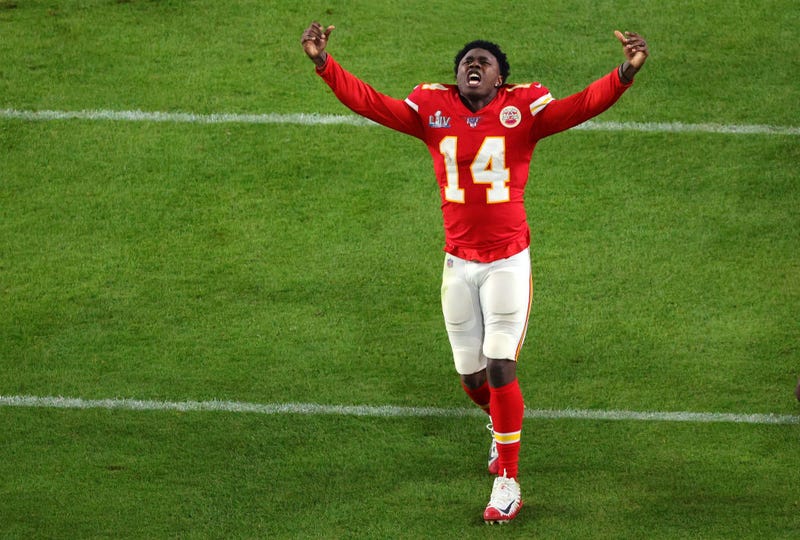 Tyreek Hill stole the show against the Buccaneers and Travis Kelce has posted numbers that are better than those of most wide receivers, but it's worth noting that Sammy Watkins drew seven targets in his return to the field from injury in Week 12, his fourth performance in the six games that he's played with at least that many looks. It's not easy for a team to support three receiving weapons, especially when two of them are literally top-five options, but Patrick Mahomes and the Chiefs aren't your typical franchise.

Should an injury to either Hill or Kelce occur, Watkins would immediately be thrust into must-start territory, and he's definitely someone to pick up given his sizable target share and the dangerous offense he's a part of. 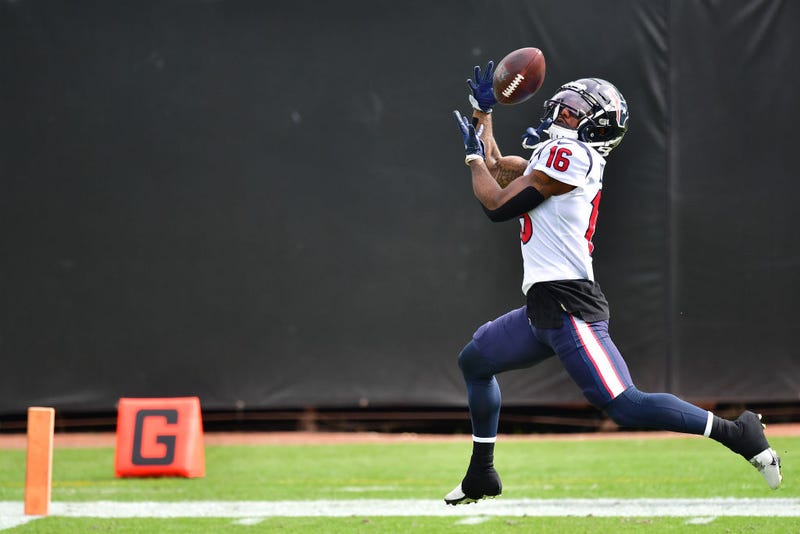 Randall Cobb is injured. Kenny Still was waived. Will Fuller was suspended. Surely, there must be some light at the end of the tunnel for the Houston Texans receiving corps?

And there is, in the fantasy players who benefit from all this drama. Brandin Cooks is the obvious choice, and his already strong rapport with Deshaun Watson will be tested even further in the coming weeks, making him a solid WR2 the rest of the way. But Keke Coutee goes from zero to... maybe not hero, but someone who you should consider on your team.

He showed smatterings of success in both 2018 and 2019 with Watson, and these next few weeks could end up being the same type of short spurt of production he's seen in past seasons. 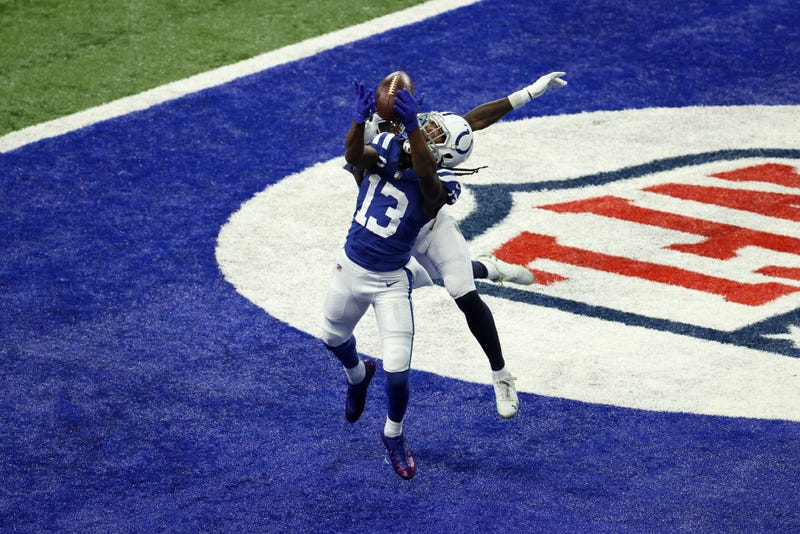 It's funny looking back at the preseason ADP, where T.Y. Hilton was listed around names like Stefon Diggs and Terry McLaurin. Clearly, he hasn't found the same success, but he was expected to be a top 25 wide receiver for a reason.

Though Michael Pittman's emergence, in addition to Philip Rivers' reliance on tight ends, will make it difficult for Hilton to achieve that status going forward, it's not impossible. After all, the colts are in the top ten in the league in passing yards and in the top half in attempts, and Hilton's target share has been fairly consistent.

Fun matchups that promise some shootout appeal against the Texans, Raiders and Texans again in the next three weeks should benefit Hilton and make him a FLEX option if you're needy.