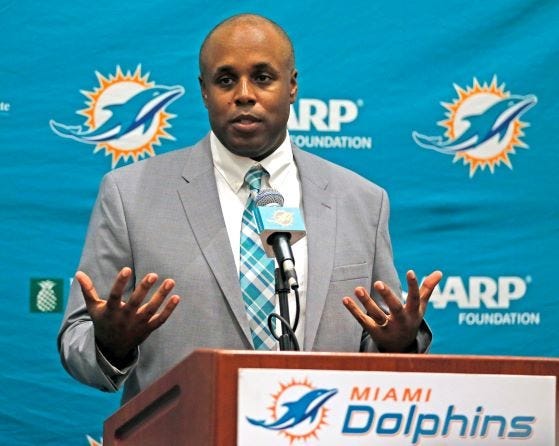 After extending cornerback Xavien Howard to a $76.5 million extension over five years, with $46 million guaranteed, making him the highest paid cornerback in the NFL, the Miami Dolphins may be rebuilding but they're going to take care of their own moving forward.

In the past Miami has shown reluctance to extend their own players in the last year of their rookie deals. Most recently Jarvis Landry played out his rookie contract, was franchise tagged and then subsequently traded to Cleveland before signing a 5-year, $75 million deal with the Browns.

Before that it was Olivier Vernon and Lamar Miller. And let's not forget about Ja'wuan James, the Dolphins first-round pick in 2014, who bolted to Denver in free agency this past March after starting 62 games at right tackle in his five years.

Howard, only 25 years old, finished No. 1 in the NFL in passer rating against at 62.9 and tied for the league lead in interceptions with seven, despite missing the final four games.

Grier and head coach Brian Flores have often spoke about building a new culture in Miami and on Thursday night one of the fundamental pieces of the new plan they've put into place was set. Securing one of the most important positions on field for the future allows Miami to turn it's attention to other positions.

Look for the Dolphins to at some point try to extend left tackle Laremy Tunsil, if not this off season, then in 2020. The Dolphins recently elected to pick up the fifth year team option on Tunsil's rookie contract.

If the Dolphins hit on Josh Rosen then the last big need on the team remains at edge rusher... well, unless you believe in Charles Harris.