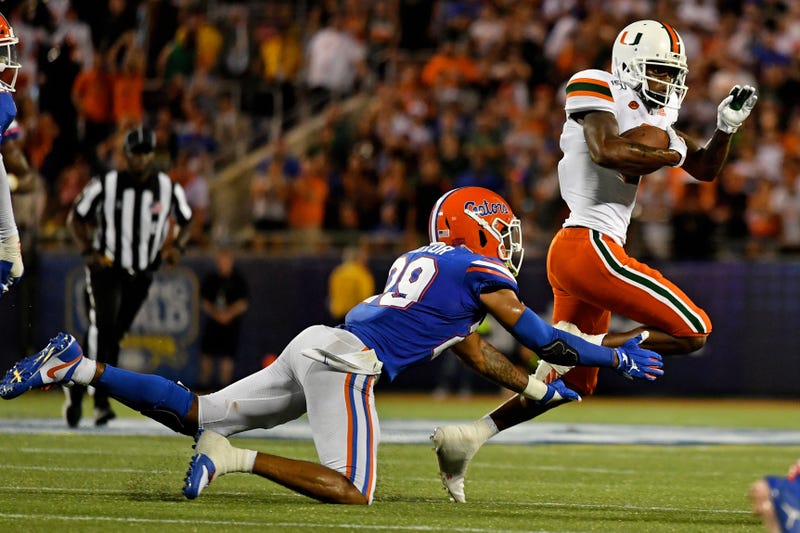 Zaslow and Amber both made it to the Miami Hurricanes vs. Florida Gators game this past Saturday and they've got a lot to say about the game and the Camping World Stadium. What happened to Zaslow after eating a hotdog at the stadium? The Miami Hurricanes debut new turnover chain and touchdown ring. Kiko Alonso and Kenny Stills could potentially be cut from the Miami Dolphins. Andrew Luck's retirement causes booing, hurt feelings and O. J. Simpson to speak up.

Find out what Zack Duarte did to Zaslow on the way to Orlando. The Backstreet Boys are back and caused trouble for Amber's exit after the game. How did Jarren Williams handle himself on Saturday's game? The Miami Dolphins cut safety T.J. McDonald.

LISTEN TO HOUR 3
Brian Monroe joins in and talks Miami Hurricanes. Jarren Williams talks about O-Line allowing 10 sacks. Did the Florida Gators Marching Band Director get thrown to the ground by a fan? Intense weather causes technical difficulties and cuts off a couple mintues of show. Zaslow debuts a new bit, #WorstTakeoftheWeekend with tweets.
LISTEN TO HOUR 4

Piling on millennials due to Andrew Luck is the most "40s" thing to do. Do fans care about Andrew Luck personally outside of the Colts? Manny Diaz had much to do with the new Miami Hurricanes touchdown rings. Desmond Howard's comment on what he shouldn't have said on the Chappelle's Show. Big Deal: Eddie Murphy is set to host SNL for the first time in 35 years and Ronda Rousey joins Total Divas Season 9.