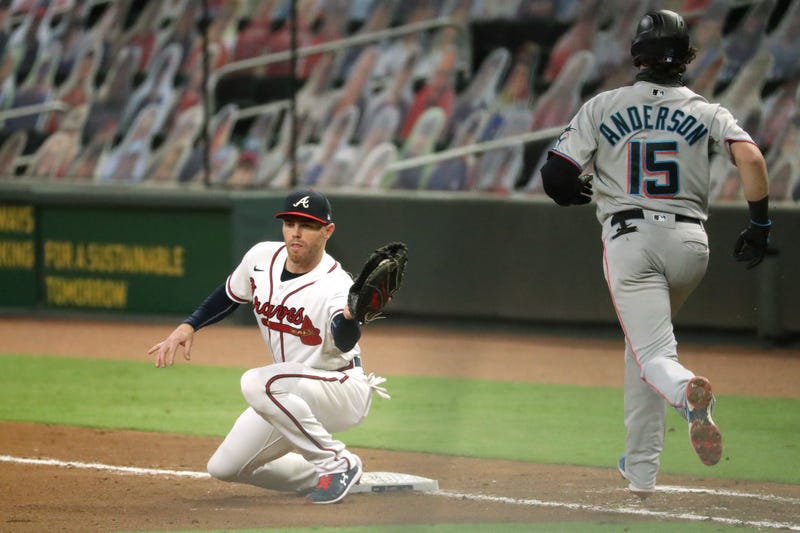 Marlins TV play by play voice Paul Severino joined Tobin and Leroy and was asked by Tobin about if last night's high intensity Marlins game vs the Braves felt different.

"Yea it felt that way for most of the season," Severino responded. "It is one thing to be playing the Nationals (who are in last place) and wonder what the Braves are doing elsewhere, it's another to have it all right in front of you.

Marlins lost to the Atlanta Braves 5-4 on Monday in a game that featured various emotional swings for the Marlins.

The started off the top of the 1st inning taking a 3-0 lead only to surrender four runs in the bottom of the 1st. It was 5-3 Braves going into the top of the 8th when the Marlins scored a run and had the bases loaded for Starling Marte. Marte hit the hardest ball he has hit all season only to go right to the Braves third baseman Austin Riley's glove.

Then in the top of the 9th. Marlins still down a run led off with a single from Jesus Aguilar and was pinch ran for by Monte Harrison. Monte Harrison was then thrown out at third base on a chopper hit by Matt Joyce, Harrison saw that nobody was covering third and made a mad dash for the base only to be tagged out off a throw from first baseman Freddie Freeman.

"It's going to be intense but its been fun but without question it is going to be character building stuff for many years to come," Severino also said, speaking of the intense gut wrenching Marlins loss on Monday.