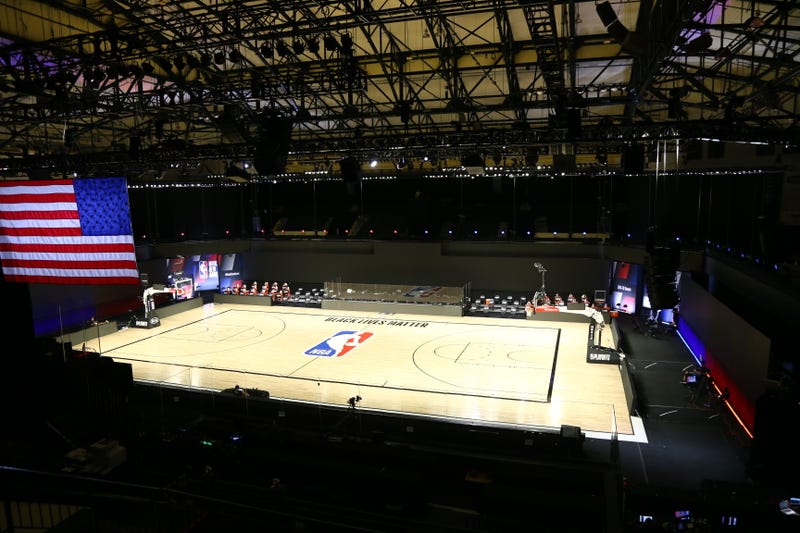 Aug 26, 2020; Lake Buena Vista, Florida, USA; A general view inside The Field House before game five of the first round of the 2020 NBA Playoffs between the Oklahoma City Thunder and Houston Rockets. Photo credit © Kim Klement-USA TODAY Sports
By Zaslow & Amber

The Milwaukee Bucks' players said that enough was enough, their message was clear and they decided not to play in their Game 5 matchup against the Orlando Magic. The first domino to fall.

Then their aforementioned opponents followed suit, and then the rest of the NBA followed and it didn't just stop there. Three MLB games were postponed Wednesday night (one of them including the Milwaukee Brewers) and the MLS decided to postpone all their matches as well.

It was something never really seen before, not so abrupt and sudden.

Sure we have seen certain players in different leagues that show some sort of protest in their own personal way, but this... this was something most people didn't know how to react to.

"I was surprised," said Miami HEAT TV Announcer Jason Jackson who joined the Zaslow and Amber Midday Show. "I had no idea how I felt about it, I was all over the place. I have a very progressive spirit, so I like when people have the ability and the platform to enact change by just acting. But I wanted to make sure the actions were a direct connect to this particular issue which then might be an avalanche into solving police brutality against black people."

Jason went on to eloquently talk about the plight of African Americans and their issues with police brutality and racism dating back to the days before the Civil Rights Movement. He spoke on the organic nature of how the Bucks went on with their protest.

"They're on the phone with the Governor of Wisconsin, they're trying to get a reconvening of the general assembly for their state," Jax said. "Now we're starting to use everything at their disposal, your strength in power to get people IN power to make the changes that save lives."

When asked by Zaslow and Amber what he thinks the players and the league should've done with the remainder of the season, Jason thought of only one thing to do and that was to shut down everything, not only in the NBA but all sports until there was some sort of police reform:

FS1 co-host of the Colin Cowherd Show and former 790 host Joy Taylor, who also joined Zas and Amber, thought of a different approach on how sports should handle giving their message.

"I believe you are most powerful with a platform," Joy said. "The reason the Doc Rivers sound talking about how we keep loving a country that doesn't love us back went viral is because they're playing playoff games. You have to have a platform to get the message out."

Joy also spoke on how detrimental it can be in the long term if you sacrifice the platform.

"If you continue to play right now we have to talk about everything you're saying and doing because you have games left."

Listen to the rest of the interview of Zaslow and Amber with Joy Taylor:

If you want to listen to all of the Zaslow and Amber, click here

i'm listening
I'm Listening: Listen back to the moments you missed
i'm listening
I'm Listening 2020: In their own words
music
Gigi Hadid and Zayn Malik welcome their first baby to the world
news
WATCH: Driver flees the scene after crashing into gas pump and starting a fire
news
At least 1 Louisville officer shot as protesters take to the streets over Breonna Taylor decision