With each passing day, we learn more about what caused the relationship between the Philadelphia Eagles and Doug Pederson to sour to the point that they fired the head coach just three years after he guided the franchise to their first Super Bowl title.

One point of contention appears to have been interference from the front office - and potentially ownership - on who should be in key roles on Pederson's coaching staff. Apparently that started long before any discussions about whether Press Taylor should become the offensive coordinator.

Rob Maaddi of The Associated Press reports that "two people with direct knowledge" have told him that Pederson lobbied for the team to keep Frank Reich as offensive coordinator after a mixed bag of a first season in 2016. Maaddi says that management's preference was to fire Reich.

In 2016, Pederson's Eagles went 7-9, finishing in last place as they attempted to repair the team after a disastrous finish to Chip Kelly's tenure. While the season was, in many ways, a disaster for 2015 first-round pick Nelson Agholor, it's difficult to blame Pederson or Reich for that because his rookie season was underwhelming. Though there were certainly same valleys in 2016, Carson Wentz showed enough in his rookie season for you to feel good about him moving forward, assuming his top wide receivers wouldn't always be Jordan Matthews and Dorial Green-Beckham.

Ultimately, the Eagles fired wide receivers coach Greg Lewis after 2016, but retained Reich as Pederson's offensive coordinator. Pederson's lobbying proved to be smart, as he and Reich helped Wentz to have an NFL MVP-caliber season before he tore his ACL in Week 14 of the season. Despite a season full of major injuries, the Eagles won their first Super Bowl in franchise history in the 2017 season. Both had a tremendous relationship with eventual Super Bowl MVP Nick Foles, with Reich eventually writing the forward to Foles' book.

A year after Pederson fought to keep Reich as the offensive coordinator, he left the Eagles to become the head coach of the Indianapolis Colts after New England Patriots offensive coordinator Josh McDaniels reneged on his commitment to fill the position. In three seasons under Reich, the Colts are 28-20, and have made the playoffs twice. Frankly, the team may have been a legitimate Super Bowl contender in 2020 if quarterback Andrew Luck didn't suddenly retire before the start of Reich's second season with the team.

In any event, this is the latest indication that for the entirety of Pederson's tenure with the team, there was a tug of war over the coaching staff. NFL Media's Ian Rapoport reported that Pederson eventually grew tired of "people telling him what to do.

As Jeff McLane of The Philadelphia Inquirer put it early this week, the amazing part about Pederson's five seasons with the team isn't that things collapsed rather rapidly, but that they came together well enough to win a title in 2017.

Pederson is gone, but Howie Roseman remains at the helm of the front office. 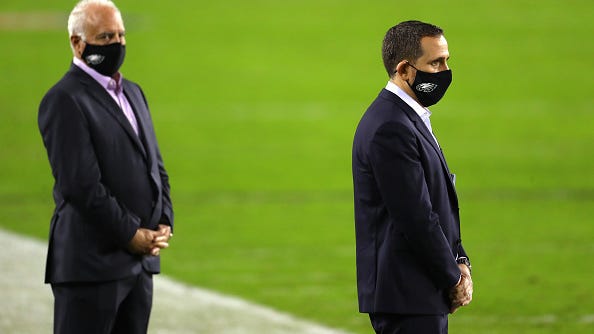