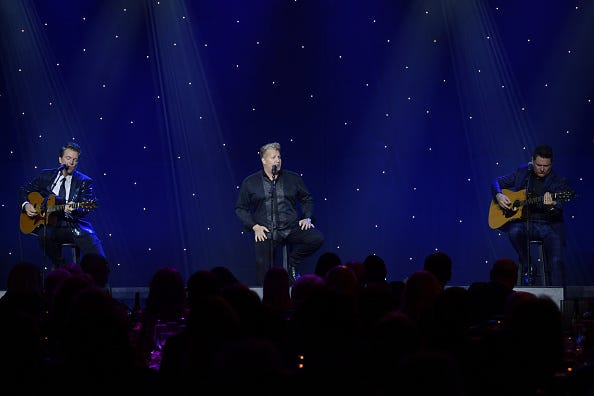 Now that the boys have gone their separate ways (although they continue to remain close friends), what's in store for each of them?

“I’m actually working on a solo record right now … and goat yoga," says lead singer Gary LeVox. "It’s weird but there’s nothing to do and I own that farm, so I’m raising goats and we’ve got yoga goin’ on."

“I think there’s no doubt that we’ll all be doing some type of something in music because we all just … that’s our passion, it’s what we love," adds Joe Doney Rooney. "For me I’m just continuing songwriting and that journey, which is just my favorite thing to do, is write songs and try to create something that might be good," he continues with a laugh. "They’re few and far between sometimes, writing.

"But you know, that’s that one great outlet that I’ve had, and I’ve really concentrated on with all this quarantine and just down time, is trying to write something good if I can.”

Jay DeMarcus agrees with and confirms Joe Don's assessment that they'll continue to be involved with music. “I opened a Christian record label two years ago called Red Street Records, and so, I’m really devoting a lot of time to that. So, we’re not slowin’ down," he laughs.

1thing
1Thing: What does it mean to be eco-friendly?
1thing
3 reasons why you should choose organic tea
sports
Jeremy Lin reveals he has been called 'coronavirus' on the court
1thing
1Thing: Turn off the power on March 27 for Earth Hour 2021
music
Lady Gaga tweets ask for the safe return of her French bulldogs, and for kindness
sports
Eddie Murphy confirms Prince beat him at basketball, as depicted on Chappelle's Show