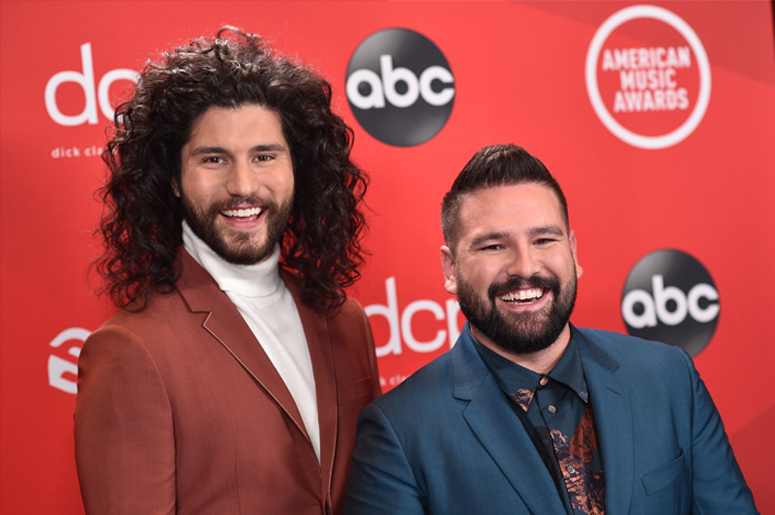 Amid quarantine, as many others had to do, Dan + Shay had to learn to adjust to a new normal. With orders to stay locked in, that’s exactly what they did, however in their case it was in a music studio, to put together there latest projects.

With their single “I Should Probably Go To Bed” at #1, RADIO.COM's Coop and the boys caught up to talk about what to expect for the future, and just how much their life has changed since their first single “19 You + Me.”

Having had to halt plans of a 2020 world tour, Dan + Shay spent the first few months of quarantine separate, with their “eyes glued to the TV.” However, as Dan revealed, “there hit a point after we’d been locked down for so long, Shay and I were like ‘let’s get together, lets just hang.’ We missed each other.” So that he did. “Shay came over the house and we sat down at my piano,” Dan went on. “It just felt good to start singing together again, because we hadn’t in a few months.”

The duo started working through some ideas and as Dan said, things they “had in the can.” Divulging that their latest single, “I Should Probably Go To Bed," started off at the last GRAMMYs with “a verse and a chorus.” Admitting that, “it wasn’t until mid-quarantine that it just happened organically.” Dan continued to explain, “with all this extra time on our hands we could really try some things, you know, do some adventurous sounds, and really explore, and its been really a blessing in disguise in that respect.” Promising, “there's lots of stuff to come this year.”

With everyone’s current obsession with “I Should Probably Go To Bed,” Coop asked the duo what we’re all wondering. Is there an album coming in 2021?

Shay alluded to the fact that an album is coming, however didn’t exactly own up to an actual date. However he did say that they “for the first time really in a long time, actually really ever, have truly had the time to kind of sit back and not only think about what we’re going to do next but also get to kind of reflect on what the last 7-8 years have looked like… and be able to truly appreciate the moments and experiences that we’ve had.”

With this allotted time for reflection and rest, Shay expressed that he and Dan have “had the time to make the music that we wanna make.” And while they’re proud of all of their music and previous records, this is just “the first time we’ve been able to truly think about it,” and put together something they extremely proud of and excited to release.”

One thing Shay additionally said was that 2021 is going to be a great year for music, so while he didn’t exactly tell us, we have a feeling an album is coming this year.

Speaking of reflection, Coop asked the boys to look back at their journey since arriving on the Country music scene with “19 You + Me,” pinpointing a particular moment or milestone that stands out. While there are almost to many to count, however the growth and relationships they’ve formed with Country radio has for them been one of their more significant achievements.

“We have amazing footage from our first radio tour,” Dan noted, “the ups and downs of that man, it’s just so fun to look back on it now. Like I said, with all the relationships with Country radio, all the people that have been in our corner since day one. It’s funny looking back at how green we were then.” Continuing to reminisce Shay added, “that’s a moment we look back on, it really set it a blaze, it was a special time and something we’ll never take for granted.”

The duo went on to chat about the hardships of being a musician, and revealed their most famous and most surprising phone contacts. Besides Justin Bieber, who they have a GRAMMY-nominated song with, “10,000 Hours.” Also on the list, Ed Sheeran, who by the way doesn’t have a phone number, just an email address, so does that count? As for most surprising, Miami Heat player Jimmy Butler, was most definitely unexpected.

Before the boys bid their goodbyes, Coop enlisted them to play a bit of “Back In The Day with Dan + Shay” where they hilariously answered questions like the hairstyle they most regret, and what their go-to teenage heartbreak song was, leading Shay to bust into singing some Daniel Bedingfield. While Dan admitted the emo kid inside him probably glued his heart back together to some Dashboard Confessional.

Honestly, you want to hear to yourself, find out all their answers and so much more in the full interview with Dan + Shay above.