1. Mohamed Sanu (WR, Atlanta Falcons) – Sanu continues to be undervalued in fantasy formats. He’s on a Falcons offense that will continuously throw the ball due to a porous defense and plays with an alpha receiver in Julio Jones who's constantly garnering extra defensive attention. Matt Ryan leads the league in pass attempts through five weeks, and Sanu is playing the most snaps of any receiver on the team. This coming week, the Falcons figure to be in a shootout with the Cardinals. If you’re short handed due four teams having a bye week, you could do a lot worse than Sanu as a WR3/flex play.

2. Chase Edmonds (RB, Arizona Cardinals) – Edmonds is a high-upside handcuff to David Johnson, but there were some rumblings back in the offseason that he’d have standalone value. That hadn't been the case until Sunday, when he looked explosive in ripping off a 37-yard touchdown run and racking up 86 yards on 11 touches. The Arizona offense has continued to improve, and Johnson can’t handle every snap with as many plays as the Cardinals are running. Couple that with the fact that Johnson is dealing with a back injury and missed half a game earlier this season with a wrist injury, and Edmonds should be owned everywhere.

3. Auden Tate (WR, Cincinnati Bengals) – Sunday marked the third straight week that Tate had seen at least six targets. He played second fiddle to Tyler Boyd, but he’s seeing some volume and got into the end zone. With John Ross on injured reserve and A.J. Green yet to return, Tate makes for a good bench receiver, as the Bengals can't stop anyone defensively and their offense should continue to throw a lot.

4. Gerald Everett (TE, Los Angeles Rams) – Dynasty leaguers have been waiting for Everett to emerge since he entered the league in 2017. He drew comparisons to Jordan Reed as a smaller move tight end who would be good in the passing game. Over the last two weeks, Everett’s opportunities have increased. He has seen 19 targets and reeled in 12 catches for 180 yards and a score. Brandin Cooks is also in concussion protocol. If he's not cleared, that should mean more action for Everett. There’s no guarantee Everett’s opportunities stay in line with the last two weeks, but given the lack of fantasy tight ends with upside, he's worth the addition to find out.

5. Chris Herndon (TE, New York Jets) – Tight end continues to be a fantasy wasteland, so if you can grab Herndon -- who's set to make his season debut this week after serving a suspension -- you’ve got a shot at having a producer. Sam Darnold is likely to return this week as well, and the two should pick up where they left off in 2018 and in the preseason. With no true No. 1 receiver on this team, Herndon will battle Le'Veon Bell and Jamison Crowder as the most targeted option in the offense. 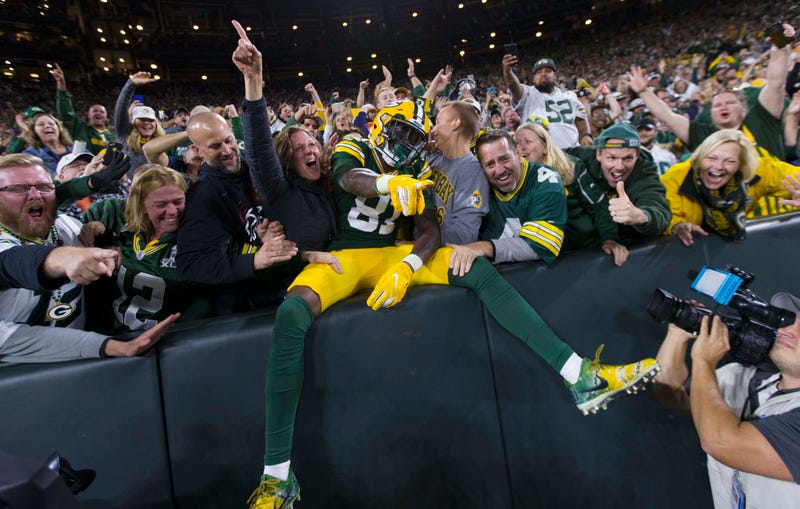 6. Geronimo Allison (WR, Green Bay Packers) – Without knowing how long Davante Adams turf toe injury will linger, Allison is worth an add. He was second on the team with six targets but led all Packers receivers in that category Sunday. The Packers did most of their damage with Aaron Jones, but Allison is going to be heavily involved while Adams is on the shelf. With four teams on a bye this week, you’ll want to have Allison available as a flex option when in a pinch.

7. Ito Smith (RB, Atlanta Falcons) – Smith is still in a timeshare with Devonta Freeman, but it’s a 60-40 split and Smith is seeing valuable touches. He totaled 64 yards on 11 touches Sunday, while Freeman tallied 70 yards on 16 touches. The fantasy difference between the two was Freeman’s touchdown. The week prior, Smith scored the touchdown. So while this may be an aggravating backfield going forward, there will be opportunities in the offense -- and Smith always holds the benefit of a larger workload if Freeman were to suffer injury.

8. Diontae Johnson (WR, Pittsburgh Steelers) – The Steelers' quarterback situation is worrisome given Mason Rudolph is in concussion protocol, but Devlin Hodges was looking Johnson’s way Sunday. Johnson has led the team in targets in back-to-back weeks. There was no splash play or touchdown to save his production Sunday, but Johnson did catch five balls and is the No. 2 option on the Steelers right now. If you’re in need of depth at the position, Johnson makes a good WR4/5.

9. Byron Pringle (WR, Kansas City Chiefs) – Tyreek Hill looks to be inching closer to returning, but he still didn't participate in any contact drills last week. Sammy Watkins also exited with a hamstring injury Sunday. Pringle led the Chiefs with 103 yards and a score while seeing nine targets, the second-most on the team to Travis Kelce's 10.  Pringle is a talented player who has worked his way up the depth chart and created some buzz. If Hill and Watkins remain out -- or even just one of them is out -- Pringle will have a chance to do damage in what projects to be a shootout against the Texans in Week 6.

10. Jon Hilliman (RB, New York Giants) – As of Monday, we don't know if Saquon Barkley or Wayne Gallman will be cleared to play against the Patriots on Thursday. Hilliman hasn’t shown a whole lot on his 19 carries for 53 yards over the last two weeks, but it’s possible he will be the lead back Thursday. Normally, you’d see a player with starting potential higher on the list, but without knowing whether Barkley and Gallman are officially out and the Giants facing an elite defense in the Patriots, it makes Hilliman a random flier at best.