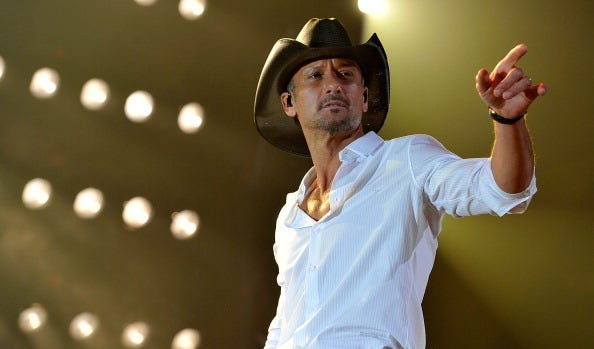 Many country artists have been all over social media during this stressful time either going live to perform mini-concerts or participating in a viral challenge.

Keith Urban was the first to put on a live show and many have since followed including Luke Combs, Brad Paisley, Chris Young, and Morgan Wallen.

Others are participating in viral challenges such as the 'Do 10, Give 10' push-up one where someone films themselves doing ten push-ups then nominates ten friends to do the same. OR the 'See a Dog Send a Dog' challenge where one posts a photo of their dog and then tags people in their story to do the same.

With all this going on, Tim McGraw decided to create his own called the #DeepCutsChallenge. He first posted a video over the weekend explaining that all artists have a song they love to sing or jam out to when alone, even if it may not be a very popular song to perform. These songs are more commonly referred to as 'deep cuts' or songs on an album that never made it to radio and are therefore not very well known or popular.

McGraw sang his favorite song 'Take the Long Way Home' by John Schneider and then nominated Brad Paisley, Jason Aldean, and Kenny Chesney to sing one of their favorite 'deep cuts' and post it to Instagram while tagging other artists to also participate.

Who's got cool songs they've always loved to play when they’re sitting around the house or when u were in high school or college? Here’s one of my favs: @thejohnschneider’s Take the Long Way Home. @kennychesney, @jasonaldean, @bradpaisley I know you got something. See what ya can reach back and play for us.

Brad Paisley accepted the challenge and then nominated Darius Rucker, but made a strict rule that he couldn't do any Hootie and the Blowfish covers!

Ok @thetimmcgraw I’ll see your John Schneider and raise you some @stevewariner. And I challenge @dariusrucker. But no Hootie covers. That’s cheating. #deepcutschallenge

Rucker not only did the #DeepCutsChallenge, but then tagged Charles Kelley from Lady Antebellum to do the same.

Ok @thetimmcgraw and @bradpaisley loved the John Schneider and the @stevewariner on your #deepcutschallenge and i heard the Challenge so here is a little Foster and Lloyd for ya. @radneyfoster @bill6049 and I challenge @charleskelley @lukebryan and @jasonaldean

Kelley came back with 'Call Me a Dog' by Chris Cornell and then challenged Russell Dickerson.

Russell actually sang a deep cut by Tim McGraw, paying homage to the man that started this maddness, and tagged Thomas Rhett in to join the fun!

Rhett completed the challenge and then nominated Morgan Wallen!

Wallen fired back with a Jason Aldean deep cut before nominating Luke Combs!

AND Combs sang an unknown Chris Stapleton track then tagged Vince Gill in. As of right now, Gill has yet to do the challenge, but check back in tomorrow for an update!

A few nights ago @morganwallen challenged me to the #DeepCutsChallenge. I decided to do “What’re You Listening To” by @chrisstapleton. This may not technically be a deep cut but it’s a song that didn’t get as much credit as I think it deserved. Chris, I’m sorry I messed up the bridge, don’t hate me. Hope y’all enjoy and I want to challenge @vincegillofficial to lay one down.

It's awesome to see these country artists interact with each other over social media and perform some amazing songs we might not be that familiar with!