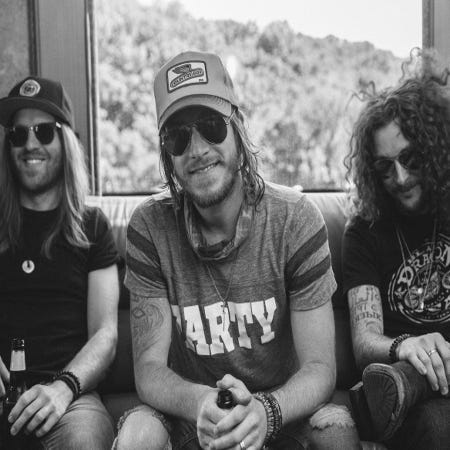 Cadillac Three, made up of members Jaren Johnston, Kelby Ray, and Neil Mason took over the US*99 Facebook a few months ago before they played both Joe's Bar and Joe's Live back to back nights in April!

These three boys are hilarious and just a genuine good time! They took a few minutes before their show to play us some new music and answer some fan questions. They joked that this is their first Facebook Live ever and Kelby said, "We're pretty good at drinking beer, but not good at Facebook." Jaren said how much he loves Chicago and how stoked all of them are to play both Joe's bars! He was even wearing a Cubs hat during the takeover!

Our US*99 listeners were able to be the first people to hear two unreleased songs from the band's forthcoming album! They do not have a set release date yet, but after listening to 'Heat' and 'Slow Rolling' we are PUMPED to hear the whole album soon! Below is the latest single from the guys: 'Crackin' Cold Ones with the Boys.'

After playing their own songs, Jaren joked that he was going to play another artists' song because, "I've been really into these guys lately." He then puts on 'Tequila,' the smash hit from the dynamic duo Dan + Shay! The whole band kept joking about Dan and Shay saying now that they are on pop radio they won't text a brother back. We loved seeing how much Cadillac Three appreciates Dan and Shay because seeing artists complimenting other artists is so cool and really proves how country music is one big family.

One of the best fan questions that came through was who takes the most naps on tour? The entire band agreed it was Jaren and his excuse was that he has a two year old at home, so when he is on the road, he needs to catch up on sleep.  If the video on his Insatgram is any indication of how loud his house can be, we don't blame him at all.

The guys are great and we cannot wait for their next album!