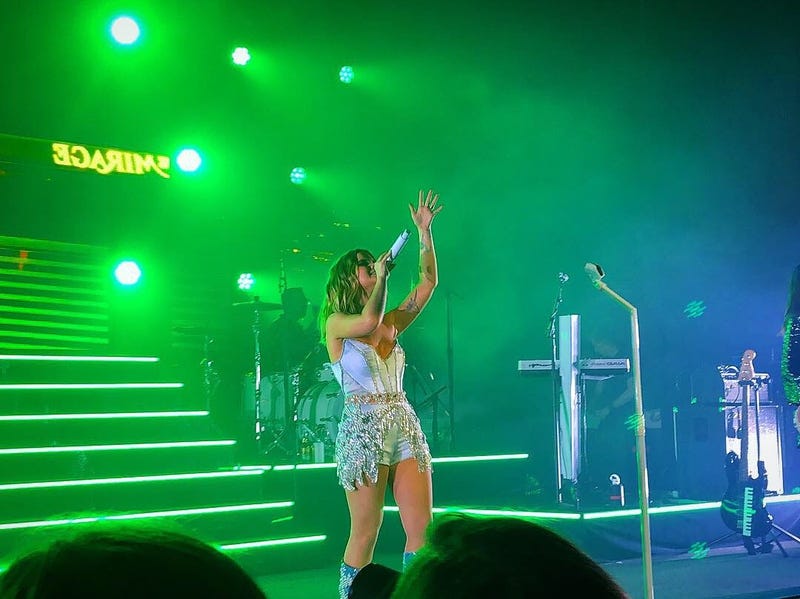 Photo credit Kimmie Caruba
By US99 Evenings US 99

March 18, 2019 03/18/2019 6:18 pm
As we said in our review of night one of Maren Morris' "GIRL: The World Tour", GIRL as a complete work was created to do and be more. A week after its release and GIRL has already proved that in a massive way.
While taking the No.1 spot on Billboard's Top Country Albums Chart, Maren Morris' GIRL had the most streams in a week by a female country artist ever.

Thank you for one of the best weeks of my life. I’m truly grateful I get to do this with y’all and I can’t fully process this news. 😭🙌🏼👑 pic.twitter.com/rc8DMhN2ZV

Maren acknowledged the record-breaking achievement in a tweet to fans saying, "Thank you for one of the best weeks of my life. I’m truly grateful I get to do this with y’all and I can’t fully process this news."

GIRL's record-breaking first week also gained Maren the first No.1 album debut of a female artist on the Top Country Albums of 2019. According to Billboard, this is also the first No.1 debut for a female country artist since Carrie Underwood released Cry Pretty last September.

Taking a look at the numbers, this is more than just a record-breaking success. The on-demand streaming figures are massive, with GIRL garnering 23.96 million on-demand audio streams. Comparing that to the last No.1 debut album by a female country artist, Carrie Underwood's Cry Pretty generated 14.44 million on-demand audio streams.
In her reaction to the news, Maren Morris gave a nod to her Chicago fans, telling Billboard, "My fans were already screaming the lyrics at the show the day after the album came out."

first show of the tour: ✔️. thank you, Chicago for being the loudest crowd + already knowing all the words to the album a day after it dropped (wtf how). this show has so much of my heart in it and I’m glad it isn’t under wraps anymore. ✨✨✨#GIRLTHEWORLDTOUR pic.twitter.com/UBOJYIjdZN

This isn't the first record GIRL set this past week either. Amazon Music announced that GIRL had broken the record for any country album debut on its platform by garnering the most first day streams as well as the most first day on-demand voice requests with Alexa.

. @MarenMorris' 'GIRL' broke the record for a country album debut on Amazon Music!

Billboard also announced that GIRL attained "the largest streaming week for a studio country album by a woman" as well as "the largest opening streaming week for any country album in 2019."
We absolutely loved getting to experience night one of this incredible tour & hear GIRL's songs being performed for the first time live. We can't wait to do it all over again & celebrate its continued success this summer at US*99 Country LakeShake!!! (We hope you grabbed your passes already...) Maren Morris will also be a part of the history-making performances the first night of LakeShake festival, as all of the acts are women!!