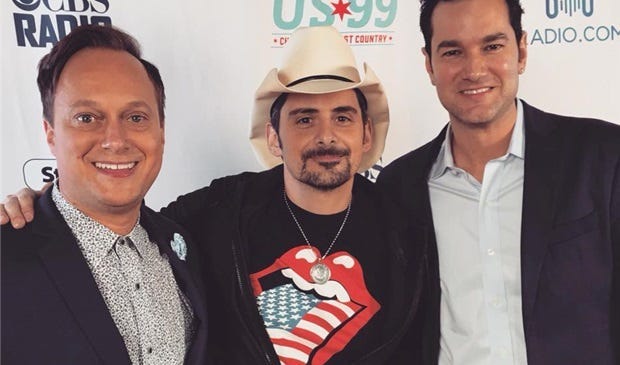 So will it be Brad Paisley or Stylz and Roman that end up on stage in their underwear when Brad's concert rolls through Chicago later this summer?

Brad is a Los Angeles Dodger's fan and Stylz and Roman are obviously Cubs fan, so the guys wanted the person whose team had the worst record to go on stage....in their drawers only....during Brad's Chicago stop.

We're not even sure that Brad agreed to the best, so it might be Stylz and Roman by default!

Brad also told the story about the song "My Miracle", which is about his wife, actress Kimberly Williams, and what she really thinks about the song.

They even get in to how good former NFL QB Peyton Manning is in the Nationwide Insurance commercials that the two star together in!

Speaking of insurance, that's also the top of this week's :15 Second Frenzy!

Shelby from Burbank faced off with Brad Paisley to see who could name more name more things that you can insure in :15 seconds!