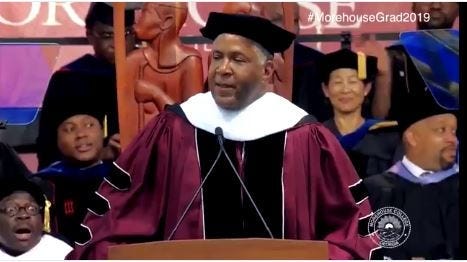 Tuition, room and board at Morehouse College in Atlanta is about $48,000 per year. The 396 students graduating on Sunday, won't have to worry about paying back any of what they might owe. That's because their commencement speaker, Dr. Robert F. Smith, a billionaire, has pledged to pay all of their school loan debts.

Smith, the founder, chairman and CEO of the private equity firm Vista Equity Partners,  announced during the Sunday morning commencement that his family would be eliminating the school debt of the entire 2019 class with a grant.

Morehouse President Dr. David A. Thomas talks about the gift

While the numbers are still being counted, Morehouse Vice President of Institutional Advancement Monique Dozier, says it could be anywhere between $18 to $20 Million dollars.  Morehouse President Dr. David A. Thomas says that would be the largest monetary gift granted to Morehouse College, ever.