By The Morning Show w/ John & Hugh and Abe Gordon

On Thursday morning reports surfaced that Urban Meyer would become the Jaguars Head Coach. Late Thursday night another domino fell with Robert Saleh and the Jets.

Reports surfaced early Friday morning that an offer had been made. But the team didn't make an announcement until late in the afternoon.

The Atlanta Falcons have made an offer to Arthur Smith to become their next head coach per sources. Smith has been the offensive coordinator for the Titans the last 2 seasons.

#Titans OC Arthur Smith has been the focus for the #Falcons and those two sides have been talking, sources say. His #Lions trip is now off. The #Eagles have been monitoring, but all eyes on Atlanta.

Arthur Smith's name has been a hot one this hiring cycle after his work the last two seasons as offensive coordinator of the Titans.

Smith has led the development of the NFL's best rushing attacks with stud RB Derrick Henry leading the charge, but has also reenergized the career of QB Ryan Tannehill.

Wikipedia updated Smith's coaching history well before anything was official. 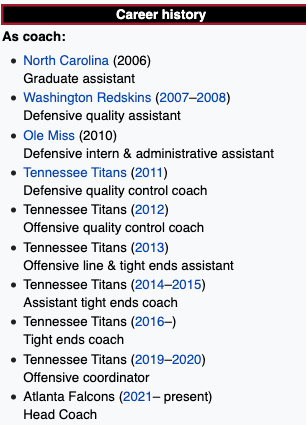