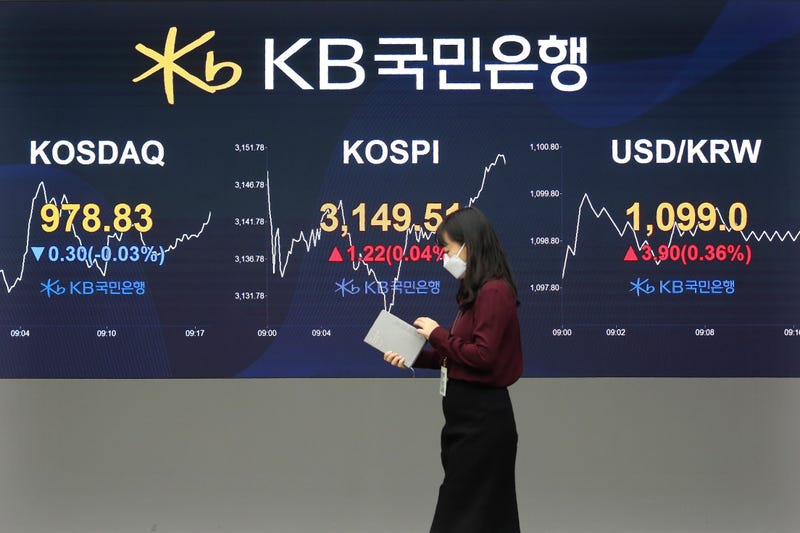 Shares were mostly higher in Asia on Thursday after a lackluster day on Wall Street, where major indexes spent the day drifting up and down near their record highs.

Benchmarks rose in Hong Kong, Tokyo and Sydney but fell in Shanghai.

U.S. futures were trading slightly higher after the U.S. House of Representatives voted to impeach President Donald Trump on the charge of “incitement of insurrection.”

Democrats and even some Republicans concluded that Trump incited an insurrection after he encouraged a mob of loyalists who went on to attack the Capitol last week. The voting concluded after the close of regular trading.

Investors have been looking past such political turmoil for the most part, though, focusing instead on expectations for a stronger economy ahead. President-elect Joe Biden is expected later Thursday to release details of his plan to support the economy. They could include bigger cash payments to most Americans.

In Asia there was little in the way of market affecting news or data releases.

Treasury yields stalled after rising sharply since the beginning of the year. The benchmark 10-year yield dipped as concerns calmed that the Federal Reserve may curtail its purchases of Treasurys. Expectations of higher government spending and the possibility of inflation have helped drive bond yields higher.

“There’s a tug of war in the market right now as to whether or not inflation will remain muted,” said Quincy Krosby, chief market strategist at Prudential Financial. “The market does not want to see inflation climb at a pace that forces the Fed’s hand."

Markets around the world have rushed higher recently on building optimism that a healthier economy is on the way because of the rollout of coronavirus vaccines and the prospect for more stimulus from a U.S. government soon to be run by Democrats.

Some of the biggest action has been in the bond market, where expectations for increased federal borrowing, economic growth and inflation have pushed longer-term Treasury yields to their highest levels since last spring.

The yield on the 10-year Treasury slowed its ascent, though, and dipped to 1.08% from 1.10% late Wednesday. Analysts said statements from two Federal Reserve officials a day earlier helped to calm concerns that it may curtail its purchases of Treasurys. Those purchases have helped keep rates low in hopes of boosting financial markets and the economy.

The concerns are reminiscent of the 2013 “taper tantrum,” when markets tumbled after the Fed said it expected to slow bond purchases as the economy recovered.

Low rates have been one of the main underpinnings for the stock market’s rise to records, even as much of the economy still struggles under the worsening pandemic. The 10-year yield has been spurting higher, up from 0.90% on Jan. 4, the day before two runoff elections in Georgia gave control of the Senate — and thus Washington — to Democrats.

The Fed has had the freedom to keep short-term rates at nearly zero in part because inflation has remained weak. A report on Wednesday showed that prices at the consumer level were 1.4% higher in December from a year earlier, slightly higher than economists expected.

The Fed released its latest “Beige Book" Wednesday. The survey of U.S. business conditions found most of the Fed’s 12 regions reported modest gains in economic activity.

In other trading Thursday, benchmark U.S. crude oil lost 8 cents to $52.83 per barrel in electronic trading on the New York Mercantile Exchange. It shed 30 cents to $52.91 per barrel.

Brent crude, the international standard, lost 10 cents to $55.96 per barrel.