Democrats in the Georgia Congressional Delegation are calling for the immediate removal of President Trump. Photo credit Getty Images

Representative Lucy McBath (GA-06) issued a statement urging Vice President Mike Pence to invoke the 25th Amendment and begin the process of removing Trump from office. "The eyes of the world are upon us", said McBath, "and the President's incitement of violence, his inducement of chaos, and his inability to faithfully discharge the powers and duties of his office make it clear. The President has refused to protect our democracy and must be removed."

Lawmakers were meeting inside the Capitol  to confim the Electoral College vote of the Presidential Election that was held on November 3, 2020, when protestors gained access to areas of the building that are off limits to the public.

Representative Hank Johnson (D-04) told Radio.com's Maria Boynton that he was on an upper level inside the House Chamber when all  the commotion began. "We started hearing noises, banging sounds." Then he says he saw Speaker Nancy Pelosi being rushed from her perch in the House Chamber.

Johnson believes it was "fueled by a desire to maintain white power and priviledge."

According to Johnson "implementation of the 25 Amendment by the Vice President" would be the quickest way to remove this President from office. "He's a clear and present danger to our democracy and to our security, both internal and external." If that doesn't happen, Johnson says he would support House and Senate leadership calls for impeachment to begin. 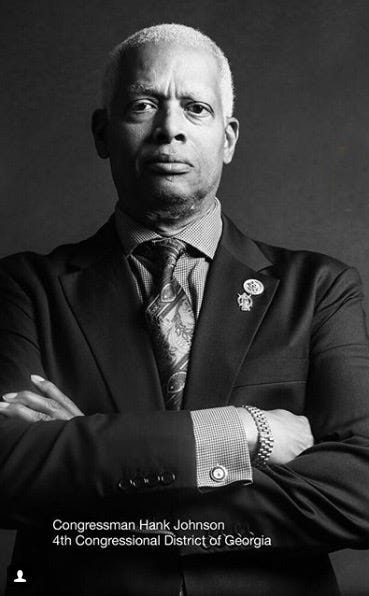 Congress is in recess until January 20, which is Inauguration Day. Therefore, Johnson says it would require lawmakers to be called back into session.

Representative David Scott (D-13) said about Trump, “The President has insulted the people of Georgia, and he is an insult to the people of our great nation. It is tearing our nation apart.  History books are cluttered with the wreckage of many great nations and civilizations, who were divided against themselves, and have perished.  We cannot, and we must not let that happen to our great nation.  This must stop now.”

Representative Nikema Williams (D-05) said, "We send our troops into other countries to ensure a peaceful transfer of power. And Donald Trump went on TV as President of the United State and told them, 'I love you'. He needs to be removed from office immediately.  He's a threat to our national security as he created and encouraged the attempted coup on our government.  I have called for Donald Trump's removal either by invoking the 25th Amendment or impeachment, whichever can happen first."​

Rep. Johnson: President Trump Should Be 'Left on the Curb for Pickup'

When President Trump was heard in a phone call, just days ago, telling the Georgia Secretary of State to "find" votes in an effort

to change the outcome of the November 3, 2020, Presidential election, Rep. Johnson called it "a blatant violation of state and federal law."

He introduced a U.S. House Resolution to censure Trump.

"You can listen to  what this President said. You can see how he set it up." According to Johnson, Trump first tried to "threaten and bully" Secretary Brad Raffensperger "to change the results" and then tried to "sweet talk and encourage him" to "let's do this together."

Throughout the hour-long phone conversation, Raffensperger along with his attorney, are heard saying that Trump's information is not correct.
Raffensperger had already certified Georgia's election results, following several re-counts. He'd also concluded there was no fraud involved, though Trump insists there was.

"It would actually be poetic justice", says Johnson referring to Trump, "if we could pick him up, take his bags out and leave him on the curb for pickup."