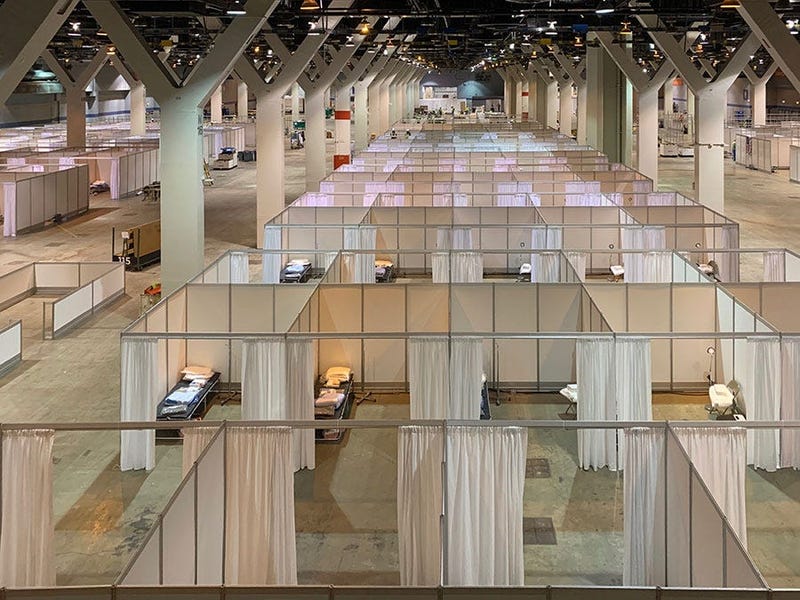 CHICAGO (WBBM NEWSRADIO) -- In just one week, 500 beds and 14 nursing stations were completed for Chicago's new makeshift hospital at McCormick Place Convention Center that will house the influx of COVID-19 patients who need to be hospitalized.

On March 27, Chicago-based Walsh Construction began turning the convention center into a hospital after The Metropolitan Pier and Exposition Authority and the United States Army Corps of Engineers announced the news.

Walsh Construction, a longtime contractor of the city, is leading the construction and finished the first 500 beds April 3. The hospital is expected to hold up to 3,000 beds and patients will be separated by level of care required.

The Acute care Facility is going to relieve pressure on an already-crowded hospital system and should be finished by April 24. Projections show Illinois will hit its peak of COVID-19 cases between April 16 and 20.

“We mobilized and began work immediately,” said Thomas Caplis, vice president of healthcare at Walsh Construction. “Walsh Construction is proud to support these extraordinary efforts of MPEA and Army Corps of Engineers that will offer essential care to our Chicago neighbors and much-needed assistance to our vital healthcare system.”

On Friday, Walsh workers were honored for their quick turnaround by Mayor Lightfoot and Gov. Pritzker, who held a press conference from the facility.

"We’re not going to sit around and wait for COVID-19 to catch us off-guard," Lightfoot said. "So, in order to ensure our residents have the proper care to battle this disease, McCormick Place will become a temporary alternative care facility."

The project comes from FEMA, who gave $75 billion for the build. Gov. Pritzker said the temporary hospital is desperately needed and the state is looking to other facilities to convert into hospitals as serious coronavirus cases continue to climb.