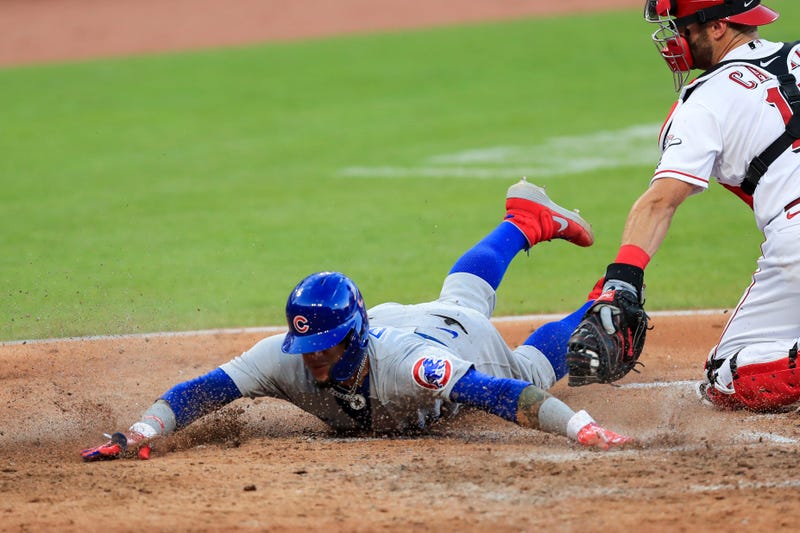 Photo credit Chicago Cubs' Javier Baez (9) scores a run at home plate under the tag from Cincinnati Reds' Curt Casali (12) in the fifth inning during a baseball game at in Cincinnati, Tuesday, July 28, 2020. (AP Photo/Aaron Doster)
By Associated Press WBBM Newsradio 780 AM & 105.9 FM

Chicago has won four of its first five games, scoring first in each one. Jason Kipnis' triple — Shogo Akiyama lost it in the sun — got the Cubs going again.

Mills (1-0) added to Chicago's stretch of impressive starts. Mills, who made four spot starts last season, held the Reds to two hits in six innings. Chicago's starters have a 1.80 ERA and a .131 opponent batting average this season.

The Reds got two-run homers by Nick Castellanos — his first since signing a $64 million deal — and Freddy Galvis but fell to 1-4, tied for the worst start in the majors.

Báez had a solo shot and a two-run homer as the Cubs pulled away.

Kipnis tripled in the third off Tyler Mahle — Akiyama lost sight of the ball in center field — and scored on Nico Hoerner's single. Kipnis added an RBI single an inning later.

Akiyama was in center field for Nick Senzel, who missed his third game because of sickness. The Reds had no update on his condition Tuesday. Senzel remains on the active roster.

Castellanos tied it 2-2 with his first homer, but Báez put the Cubs back ahead in the fifth with a double off Cody Reed (0-1) followed by a great dive. He scored from second on Kyle Schwarber's single to left, besting Aristides Aquino's perfect throw by stretching his left hand over the corner of the plate to avoid the tag, putting Chicago ahead to stay.

Cubs: Kris Bryant got a day out of the starting lineup because of a sore left elbow. Manager David Ross said the injury isn't serious.

Cubs: Kyle Hendricks (1-0) threw a three-hit shutout against the Brewers, becoming the first Cub since 1974 with a shutout in a season opener. He's 6-3 in 17 career starts against the Reds with a 3.84 ERA.

Reds: Sonny Gray (1-0) tries to extend his major league record streak of 34 consecutive starts without allowing more than six hits. He's 3-1 in five career starts against the Cubs with a 2.70 ERA.