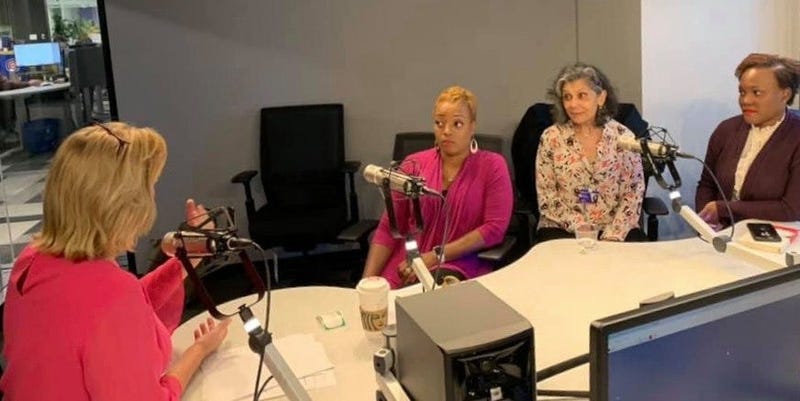 CHICAGO (WBBM NEWSRADIO) -- On average one in eight women in the U.S. will face a breast cancer diagnosis in her lifetime. It remains the most common cancer diagnosed in women worldwide, but health experts say more and women are tackling and surviving the disease.

"The survival rates have improved for the great majority of women, there are treatments that weren't available 20, 30 years ago that are really making a difference for women being cured." Khan continued, who's research is primarily focused on breast cancer prevention and is funded by the NIH, and by the Breast Cancer Research Foundation.

Heightened awareness and early detection through screening have made a difference, but there's still a long way to go.

"We see a lot of women are concerned about their ability to afford services or where to go to access those services. There is also some apprehension," said Tiosha Bailey, Executive Director, Komen Chicago.

"My mom died of breast cancer. I found my lump in a routine spot check, because of my family history," Waller said. "I was diagnosed with infiltrating triple negative carcinoma. I had nine months of chemo and radiation."

Waller said her mother had a completely difference experience when she was diagnosed in the early 90's.

"My mom saw her initial doctor who saw the abnormality and said she was fine," she recalls. "She was a victim of implicit bias. There was a spot on her mammogram. A white male physician told her not to worry about it. By the time she was officially diagnosed, she was metastatic. Not to say things have changed dramatically, there are still structural barriers."

Since Waller had breast cancer in her family, she knew she needed to be more vigilant.

"I knew I had to start my screening because of my mom," she said.

Some women with breast cancer in their family history turn to genetic testing.

"Genetic testing is a hot topic. There's been a lot of science that has been uncovered, the two genes that are cancer causing, BRCA1, BRCA2. If you test positive for the gene, the decision is different in different phases in their lives," Khan said. "Some women have to increase their MRI and Mammography each year. In considering cancer causing genes, with women with these mutations, it's also not unreasonable to consider a mastectomy. The difference now is that women have choices on how they want to proceed if they have the genetic mutation."

The American Cancer Society reports that breast cancer death rates declined 40 percent from 1989 to 2016, a massive improvement attributed to improvements in early detection.

"The reason why we've made so much progress is because of the women who participate in clinical trials. All the progress wouldn't be possible if women weren't willing to participate," Khan said.

Walker said those woman are "women who've paved the way for my survival. There's now an opportunity for women to live and thrive after breast cancer."