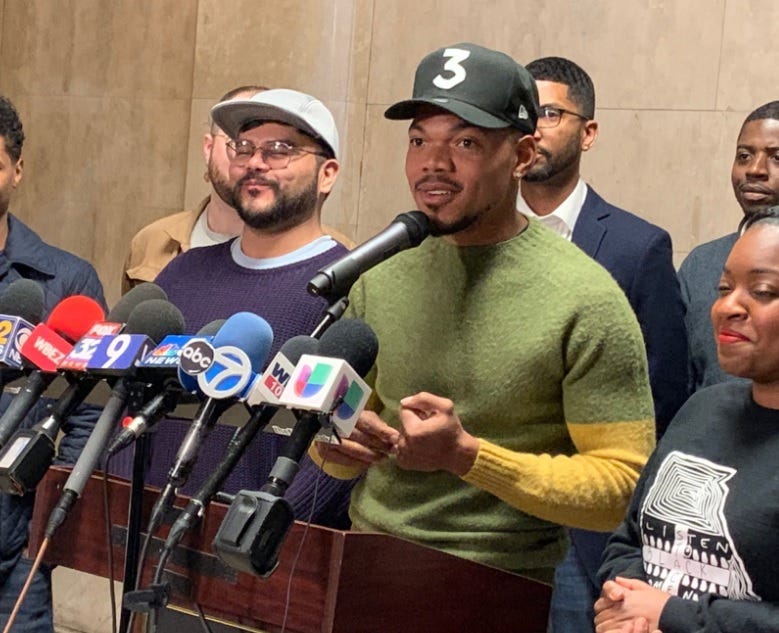 CHICAGO (WBBM NEWSRADIO) -- Chance the Rapper--who had been politically active in the race for Chicago mayor -- came to City Hall Thursday to announce his choice between two the two runoff candidates: Toni Preckwinkle.

The recording artist – whose real name is Chancelor Bennett – initially backed Amara Enyia in the Feb. 26 mayoral election and threw $400,000 into her campaign. She was winnowed out of the field, as Preckwinkle and Lightfoot emerged as the two top vote-getters.

Bennett said he’s talked with activists and his supporters since then to get their thoughts on the finalists and they’re not comfortable with Lightfoot.

“Her past experience as a prosecutor has not been in the best interest of young black people in Chicago,” he said. He added that Lightfoot “hasn’t been entirely truthful.”

Lightfoot, former president of the Chicago Police Board, was an assistant federal prosecutor.

The musician said a lot of organizers on the criminal-justice front have found Preckwinkle joining them in their efforts. His father, Ken Bennett, is one of the co-chairs of Preckwinkle’s campaign. Chance said he made his own decision on whom to back.

Lightfoot, in a written response to the musician’s announcement, said she’s willing to listen to young people and activists. The statement, in part, reads:

“I have great respect for Chance and the community activists and organizers across the city who are fighting for social justice,” said Lightfoot. “I share their passion and commitment to pursuing true police accountability because we have not had nearly enough progress to date.”