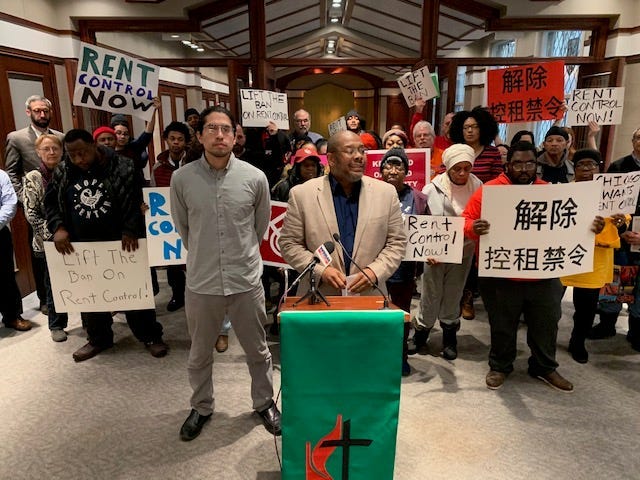 "One out of four Illinoisans are severely rent burdened, they are paying over 50 percent of their income toward rent," said Rod Wilson, Spokesman, Lift the Ban Coalition.

The 1997 Rent Control Preemption Act prohibits Illinois municipalities for enacting rent control. A bill in the house proposes to repeal the ban.

Guzzardi has proposed a bill in the Illinois House to repeal the ban.

"We're all being held down from an economy that doesn't pay far wages, that makes more and more profit for the folks at the top. It's the big developers and the greedy landlords taking our money," Guzzardi said.

Many of the rent control supporters said it would prevent landlords from raising rents and prevent low-income residents from being forced out of their homes, neighborhoods and cities. They believe communities are being destroyed by gentrification and real estate speculation that lead to unregulated rent increases.

"People are being forced out of their homes. This isn't a poor issue, a poor people issue, it's a middle income families issue," Wilson said.

Ballot questions asking if Illinois should repeal its ban on rent control got more than 50 percent yes votes in three precincts in November. A similar question was asked last spring where 75 percent of voters responded yes.

Governor Pritzker has said he would support the repeal.

The Chicagoland Apartment Association argues that rent control will reduce the quantity and quality of affordable housing.

Illinois is one of 35 states across the country with a rent control ban. Similar efforts to repeal a ban on rent control are underway in California and New York.