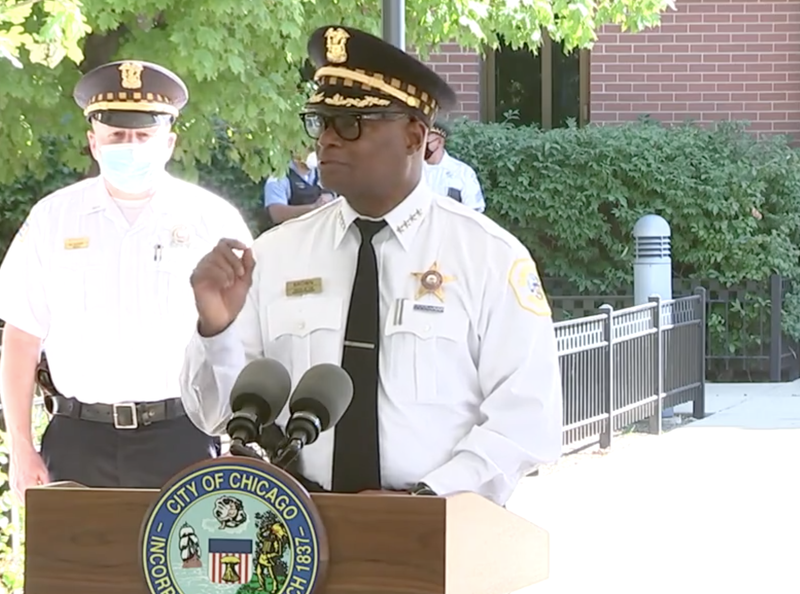 The Neighborhood Policing Initiative has been tried in the 25th and 15th police districts and now will be put into effect in the 9th (Deering), 10th (Ogden) and 11th (Harrison) District.

As part of the expanded initiative, each district will rollout new District Coordination Officers (DCOs) this fall, who will work directly with community members to resolve public safety issues through collaboration and remedy neighborhood issues with the help of beat officers, detectives, aldermen, area businesses and sister agencies. To ensure DCOs are fully integrated in the neighborhoods they serve, the CPD is also launching a new community-immersion training program, completing one of Mayor Lightfoot’s 90-day reforms announced in early June.

"I know that Chicago's West Side residents will welcome the launch in the 9th, 10th and 11th Police Districts," said Ald. Chris Taliaferro, a former Chicago Police officer. "With the expansion of coordination officers through this new initiative, we are putting a name and a face on the officers who serve our community. Rather than calling 911 for non-emergency public safety issues, residents will be able to call their local DCOs directly. This not only builds trust between officers and the communities they serve, but it cuts down on calls to 911."

"As public servants, our first mission is ensuring the safety and security of our residents and communities, and that’s a mission not built on force, but on a foundation of trust, legitimacy and transparency. Trust travels both ways - between our communities and our officers sworn to serve and protect them - and forms a basis for everything we are doing in respect to community policing here in Chicago."

It was in that spirit, she said, that a little over a year ago there was the public launch by the Chicago Police Department of a new program called the Chicago Neighborhood Policing Initiative, which was launched as a pilot in the 25th District. Ald. Reboyras "raved about it from the very beginning," the Mayor said.

She said the program is fundamentally about problem solving, one in which residents identify geographically-specific problems and an officer dedicated to that geography is called upon to address those hyper-local problems in a responsible, innovative way.

"This is about addressing public safety issues both big and small through face-to-face collaboration," Lightfoot said. "Simply put, our officers are spending the bulk of their time in their communities responding to 911 calls."

The Mayor said she's heard officers say they want to get out of the car and develop deeper relationships, "but the structure of the job worked against them." It frustrated them and residents.

"They need a chance to get to know each other, and that's what the Neighborhood Policing Initiative has done. Under this program, designated officers called District Coordination Officers, or DCOs, have an opportunity and responsibility over defined geography within a community," she said.

Those officers will hand out business cards with their phone numbers and emails, the Mayor said. Rather than call 911, residents can contact those officers, "who then works to resolve these issues with the help of beat officers, detectives, local aldermen, area businesses and, of course their colleagues in city government at other agencies....It means more collaboration, more connection and more trust. All of which has given both residents and officers the basis to build authentic relationships, which is at the heart of community policing."

The Mayor also announced, "as part of our 90-day community policing and reform deadline we set earlier this summer, the Chicago Police Department will also be piloting the new community training academy - a three-day training program that will be included during the training for new district coordination officers, created in partnership with the Metropolitan Peace Academy and other community organization leaders.

"The community training academy will provide community-based and community-specific trainings for the DCOs and the officers assigned to the district's community policing office. Formally connecting them to the specific dynamics in a given community and deepening their understanding of historic key factors relating to policing and community concerns in a particular geography...No single program will solve every problem or bridge every divide between our police and community, issues that have been brewing for years. But these issues are necessary for us to address in a forward-thinking, positive way and bringing all the community stakeholders to the table, and that's what we're doing."

Chicago Police Superintendent David Brown said he is so excited about the expansion of the Neighborhood Policing Initiative.

"It is what policing has to be. Enforcing only is just not sustainable, not successful. Not only does it not connect with the community, but it actually does just the opposite: It tears down trust that you would have, when you need to build up trust," he said.

There are many public safety concerns "that don't warrant a call to 911. The DCOs are tasked with answering those calls and addressing such issues, problem solvers," Brown said. They'll help resolve "nagging concerns" and work to "find solutions on larger public safety problems."

Brown said since the launch of the initiative, CPD has seen strong results, particularly in the 25th District on the Northwest Side, where 911 calls are down.

Brown said community policing "perhaps is the most important tool any police officer can implement" and is vital to solving crimes.

Led by Commander Angel Novalez, who now leads CPD’s Office of Community Policing, the Neighborhood Policing Initiative is now in five police districts in Chicago, with a presence in every district in Area 4. In each district, DCOs are equipped with cell phones, business cards, and email addresses to provide to residents so they can not only express their neighborhood concerns one-on-one, but work with the officers on ongoing non-emergency public safety issues affecting the community, such as speeding cars or a loud neighbor.

"I've seen the value of the Neighborhood Policing Initiative firsthand," said Commander Angel Novalez of the Office of Community Policing. "The officers that sign on as part of this new initiative have the ability to change lives and transform communities by working hand in hand with those that live within these communities.

Modeled off the Neighborhood Policing Structure in New York City, Chicago’s Neighborhood Policing Initiative is supported thanks to The Joyce Foundation and John D. and Catherine T. MacArthur Foundation. Over the coming years, the Chicago Police Department will continue to expand the program across police districts in the city, prioritizing those who experience the highest levels of violence.