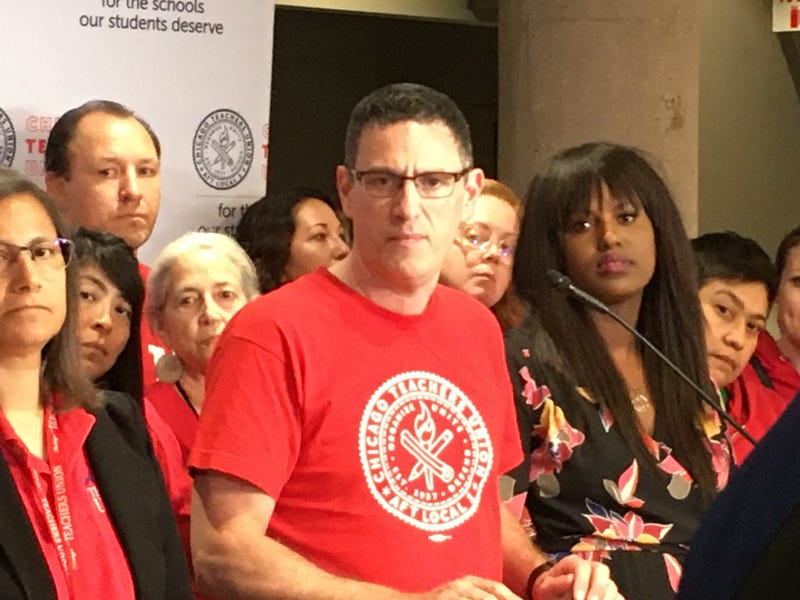 CHICAGO (WBBM NEWSRADIO) -- Chicago Public School teachers have weighed in on what they want before the new school year can begin under the pandemic.

The Chicago Teachers Union conducted a survey in mid-June asking members what they believe is necessary in order for Chicago Public Schools to safely reopen in the fall.

According to CTU, nearly 5,000 educators responded; and more than 85 percent of CTU members who completed the survey feel they should not or might not go back to work in the fall without a detailed plan and resources that will help guarantee the safe reopening of schools.

This includes daily COVID-19 testing and temperature screening for everyone entering the building; a nurse or other health professional in every school, every day; remote learning options for particularly vulnerable students and staff; a transportation plan for students that involves distancing on school buses, as well as Chicago Transit Authority buses and trains; and a social worker or counselor dedicated to helping students and staff in every school, every day.

“Our members have made it very clear that they are not willing to put the health—and the lives, quite frankly—of their students, or their students’ families, or their own in jeopardy under any circumstances, and especially now if the Trump Administration is talking about using them as guinea pigs to help jumpstart the economy,” CTU President Jesse Sharkey said, in a statement.

RELATED: Lightfoot Shrugs Off Trump Demand To Reopen Schools | Indiana Parents Debate Sending Kindergartners To School | Schools Are Good To Reopen, But On Their Own: Pritzker

More than two-thirds of members surveyed said they would not return to work without masks, gloves, and other PPE provided by the district. They also want there to be a mask requirement for everyone who enters a school building, as well as daily sanitizing of every surface in the building; a plan that would limit the number of students physically present in classrooms; class sizes that allow for students and staff to always be six feet apart; and multiple hand-washing stations throughout a building.

According to CTU, 96 percent of members said adequate devices and Internet connectivity for every student must be in place before returning to school, highlighting the digital void that exists for many black and brown students on the South and West sides of the city.

Nearly 70 percent of rank-and-file members were not at all comfortable or mostly uncomfortable with the idea of medically compromised educators being forced to work in-person, in school in the fall.

CTU said members in more than two dozen positions, from clinicians, social workers and special education, to art, Pre-K and PSRPs, submitted to the Union detailed concerns about what a return to in-person work must look like for their particular job and job duties.

“We’re not blind to the fact that this is a tremendous undertaking, and it’s going to take the re-imagining of how we deliver public education,” CTU Vice President Stacy Davis Gates said, in a statement. “This pandemic has already transformed how we teach, and how our students learn, and now is the time for CPS and districts across the country to transform themselves. How we do public education needs to represent what educators and parents—not the federal government—are saying their schools need.

“Doing it the Donald Trump way has resulted in three million people infected and nearly 150,000 dying from COVID-19,” Davis Gates said. “The Trump way is a death sentence.”

In a district that is nearly 90 percent black and Latinx, members surveyed said that schools in communities that have been highly vulnerable to COVID-19 should have a connection to testing sites—or testing in the school itself—so that families without health insurance or those reluctant to go to the hospital for citizenship reasons can be tested without worry, CTU said.

“This is really about equity, about keeping students, parents and educators involved in planning and decision-making, and about the day-to-day life in a school that the pandemic revealed when schools closed in March.” President Sharkey said. “Educators do a lot, but it’s not just what we do, but what we experience…people were surprised to learn that schools didn’t have warm water, or windows that opened, but this is everyday life for our members, who are legitimately frightened and concerned, but ready to fight for what is needed for all members to return to school when it is safe.”

The Union is currently in negotiations with CPS on guarantees that schools will have what is necessary to open safely when appropriate.