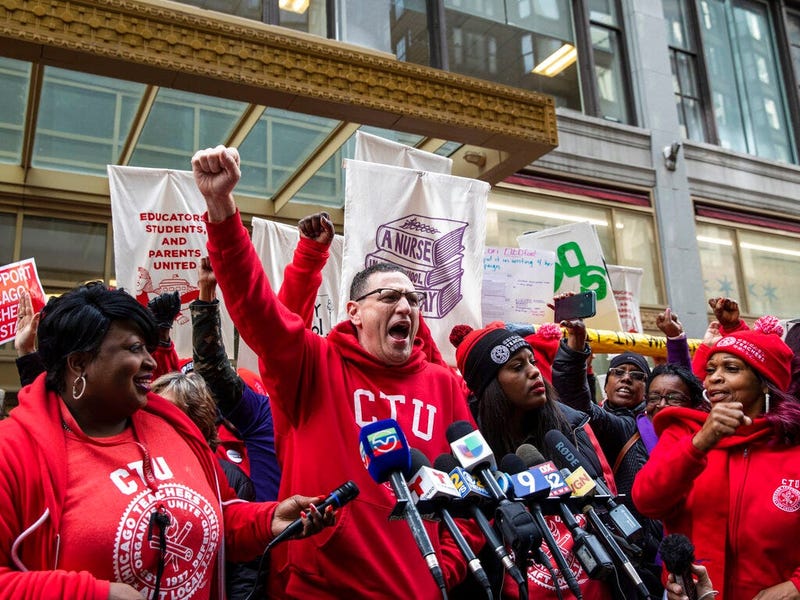 CHICAGO (WBBM NEWSRADIO) -- For a sixth day, Chicago Public Schools students are out of classes as teachers walk the picket lines and it doesn't appear they're any closer to an agreement.

Striking teachers chanted "Lori Lightfoot, get on the right foot," as they continued to walk picket lines Thursday morning.

"We are trying to put together a puzzle in order to end this strike, but we don't have enough pieces on the table in order to complete the puzzle," Sharkey said. "The Mayor still has a handful of pieces in her pocket.

"We want the Mayor to take the last few pieces of this puzzle and put them on the table so that we can make a picture that looks like fairness."

Teachers on the picket line, including Gabriel Green and Eddie Taylor Jr., tried to paint a picture of oversized classrooms.

"Last year, as a first-year teacher, the most students I had in a classroom was 56. This is an outrage," Green said.

Eddie Taylor Jr. said he looks at his students and sees a look of frustration on their faces.

"When they are trying to grasp a concept and they are lost in a sea of 38, 37 other students, and you want to reach out to that one individual student and then you see that there are 35 or 36 with the same exact face," Taylor Jr. said.

Those on the picket line were joined by Sara Nelson of the Flight Attendants Union and Dan Montgomery, President of the Illinois Federation of Teachers.

"And if it takes extending this picket line to O'Hare Airport, then that's what we are ready to do," Nelson said.

Montgomery said what this strike is saying is "the chickens are coming home to roost."

He said he is sorry from the bottom of his heart for the disruption and said it personally hurts the members.

CTU President Jesse Sharkey conceded that the strike is hurting some.

He said the union is dedicated to improving the schools. He said it is a civil rights issue and that teachers are willing to skip paychecks and put their bodies on the line, in his words, to make it happen.