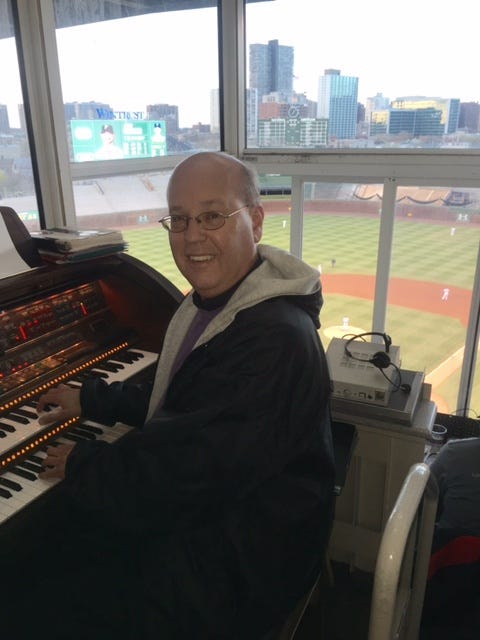 CHICAGO (WBBM NEWSRADIO) -- Wrigley Field organist Gary Pressy, who is set to play for his 2,679th consecutive game Saturday, is ready to call it quits, the Chicago Tribune reports.

The lifetime Cubs fan began playing the organ for the Cubs in 1987 after stints at Loyola and DePaul basketball games. He's planning to wrap it all up at the end of the season -- with fingers crossed he'll be ushering it all out at his giant Lowrey organ high atop his beloved Wrigley Field during the World Series.

“I’ve been there a third of a century, 33 years, and I think the cup is full,” Pressy told the Tribune. “I was debating it back-and-forth, but I really just wanted to spend more quality time with my family. Around the All-Star break I really got to thinking about it and made my decision.”

After this, my 33rd season, I’ve decided to spend more quality time with my family. I can’t say thank you enough. -GP https://t.co/P2XwaXKl0h

Pressy, 61, takes care of his 95-year-old mother, Virgina, who he credits for forging the path that led him to his career.

In 2015, he told WBBM Newsradio's Lisa Fielding he has been playing piano and baseball since he was 5.

“When I was five-years-old, I was living the dream, in the backyard, playing baseball. I’d be doing the announcing, doing the organ music so it’s really come full circle for me.”

Pressy typically arrives at the park three or four hours before game time to prepare. He’s played hundreds of renditions of the seventh-inning stretch, and performed with countless singers, painstakingly matching their tunes and their paces.

“When the singer comes, they’ll talk to me, basically I just say, enjoy yourself, have fun, try and keep up with the organ,” he told WBBM. “We have a lot of fun with it. Harry [Carey> was a great singer, but Harry wasn’t Sinatra either. We just try to have fun with it.”

The Cubs will honor Pressy later in the season, the Tribune reported. A spokesperson said organ music will continue at the ballpark.

At Wrigley, where the Cubs faced off against the Pittsburgh Pirates Saturday, admirers surprised by the news of the retirement, reflected with nostalgia about the organist's long career.

Read more at the Chicago Tribune.