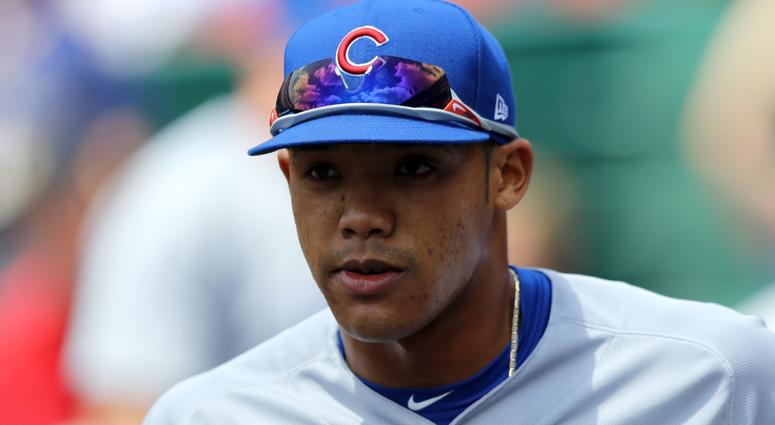 (670 The Score) -- Infielder Addison Russell's time with the Cubs has come to an end.

The Cubs on Monday non-tendered Russell, whose tenure in recent seasons had been marked by on-field struggles and off-the-field problems. With the Cubs declining to offer Russell a contract for 2020, he becomes a free agent.

Russell hit .237 with nine homers, 23 RBIs and a .699 OPS in 82 games in 2019. He also regressed defensively and was publicly called out by then-manager Joe Maddon for his lapses in concentration, which contributed to his demotion to Triple-A in late July.

Russell had previously served a 40-game suspension in late 2018 and early 2019 for violating the league's domestic violence policy. His ex-wife, Melisa, extensively detailed Russell's emotional, verbal and physical abuse, and MLB conducted an investigation that resulted in Russell's suspension. In the aftermath of the revelation of the incident, a large segment of fans called for the Cubs to part ways with Russell.

Throughout last offseason and the 2019 season, president of baseball operations Theo Epstein and the Cubs walked a fine line in balancing how the organization could take domestic violence seriously while also offering Russell a second chance and helping to rehabilitate him.

After the Cubs announced Monday they were parting ways with Russell, Epstein further addressed Russell's ugly past.

"We decided to non-tender Addison Russell today simply because the role we expected him to play for the 2020 Cubs was inconsistent with how he would have been treated in the salary arbitration process," Epstein said in a statement."In the year since we decided to tender Addison a contract last November, he has lived up to his promise to put in the important self-improvement work necessary off the field and has shown growth as a person, as a partner, as a parent and as a citizen. We hope and believe that Addison’s work and growth will continue, and we have offered our continued support of him and his family, including Melisa."In the last year, the organization has also put in the important work necessary to bolster our domestic violence prevention training for all employees, all major league players, all minor league players and all staff. We also offered healthy relationship workshops for the players’ partners and provided intensive, expert domestic violence prevention training for player-facing staff. This heightened training and our increased community involvement on the urgent issue of domestic violence prevention will continue indefinitely."We wish Addison and his family well."

The demise of Russell's tenure with the Cubs wasn't on anyone's mind back in 2016, when he authored an All-Star campaign and was a key figure in the organization snapping a 108-year championship drought. Russell had 21 homers and 95 RBIs and was spectacular defensively that season, and he also came up with one of the Cubs' biggest hits of the postseason with a go-ahead homer in Game 5 of the National League Championship Series, which was tied 2-2 at the time.

Russell regressed at the plate over the course of the next three seasons, never coming close to reproducing his 2016 form. Meanwhile, Javier Baez broke out as a star and earned the starting shortstop job permanently in 2019. That relegated Russell to primarily playing second base, but the Cubs seemingly view 22-year-old Nico Hoerner as the future at that position after he performed well while debuting in the big leagues last September.