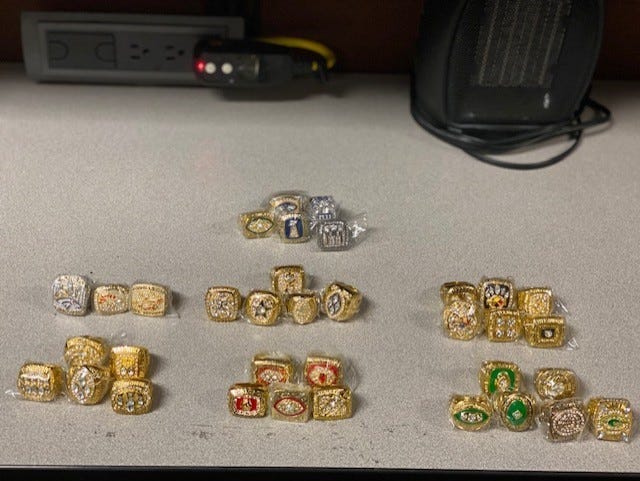 CHICAGO (WBBM NEWSRADIO) -- A shipment of fake sports rings fooled no one at O’Hare International Airport.

What federal authorities call “X-ray inconsistencies” in the shipment from China led to it being held for inspection last month. Inside, U.S. Customs and Border Protection agents 35 Super Bowl rings that were deemed counterfeit, due to their poor quality, packaging and low value.

If the rings had been real, officials estimate their retail worth would be more than $350,000.

No Chicago Bears rings were included, but there were six fake Green Bay Packers championship collectibles.

“Preventing counterfeit items from entering the United States is crucial to protecting consumers and our nation’s economy,” Acting Assistant Area Port Director Ralph Piccirilli said in a news release. “This most recent intercept of counterfeit NFL rings is a great example of how our CBP officers stand ready to serve the United States in support the CBP mission as the world battles this unprecedented COVID-19 pandemic.”