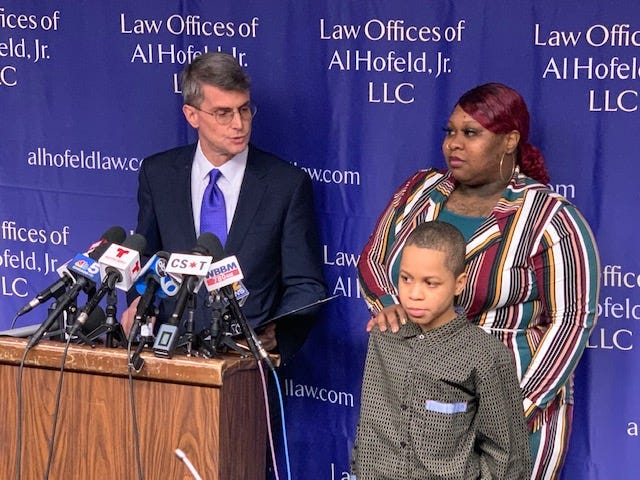 CHICAGO (WBBM NEWSRADIO) -- Asia Gaines says since her 9-year-old son Jomaury was beaten with a belt inside a school bathroom last fall, he's never been the same.

"He can't sleep, he can't eat, he's bed wetting every night. He thinks somebody is coming to get him. It's really traumatized him," she said.

Gaines and her family have filed a civil-rights complaint in federal court against the Chicago Board of Education, Chicago Public Schools teacher Kristen Haynes and her 56-year-old friend, Juanita Tyler.

The lawsuit accuses his teacher of helping her friend beat the fourth-grader with a belt inside a bathroom at George W. Tilton Elementary School.

"Tilton Elementary allowed a total stranger into the school to whoop or beat Miss Gaines’ son with belt and knowingly left him alone with that stranger in the boy's bathroom," said attorney Al Hofeld, Jr.

The complaint alleges that Haynes arranged for her friend, Juanita Tyler, to come to the school and drag the young boy from class into the bathroom and beat him dozens of times.

Said Hofeld: "People are making comments on Facebook that ‘She did the same thing to me.’ It's an open secret. It's common knowledge when you talk to people at this school, she's been doing this for years.”

Gaines said Haynes even showed her the belts she kept in the closet and had names for them.

"Ms. Kristen Haynes called the belts ‘Mr. Brown’ and ‘Mr. Black.’ My daughter knew about these belts. She saw this because she is in the same classroom. My son was repeatedly beaten with the belts off and on,” she said.

"I have to send my kids back to school. I have no choice. I'm very angry about what happened to my son. School is supposed to be a safe haven for kids, and kids are supposed to be protected no matter what. Teachers are supposed to protect the kids from harm or danger and she failed to do so,” Gaines said.

CPS said Haynes no longer teaches at the school and an investigation is ongoing.

"Every student deserves a safe learning environment and the district will not tolerate actions that place students in the way of harm,” CPS said in a statement. “After learning of deeply concerning allegations, the district removed the employee from her position and launched a full investigation. While the investigation remains ongoing, the district is working directly with the school to ensure support is available for the student and family."