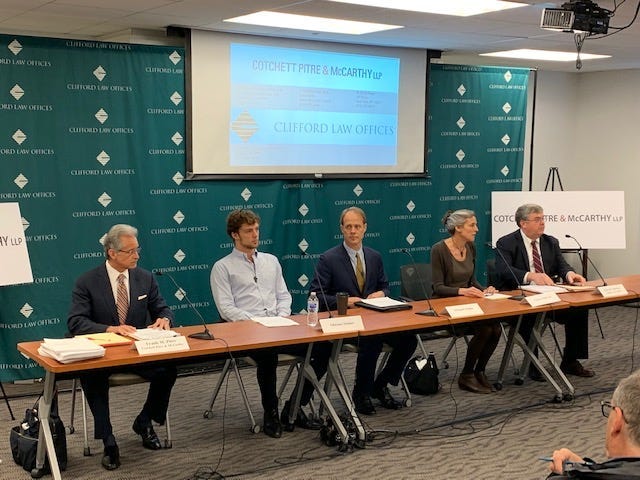 "This should not happen to anyone again. That's why we're here," said Michael Stumo.

Stumo's family filed a wrongful death lawsuit against Boeing, Ethiopian Airlines and a Delaware company alleged to have manufactured a defective part of the plane.

"The Boeing 737 Max 8 drove itself and fully buried itself in the ground at hundreds of miles per hour, disintegrating into small pieces under the earth," he said.

"We flew there to bring her home, but we learned there were no survivors. Then we learned we couldn't bring home her body or even fragments of her body."

The investigation into the Ethiopian Airlines crash points to fatal flaws in an anti-stall system known as the Maneuvering Characteristics Augmentation System or MCAS.

"The whole world will be affected if we don't get this right," said Ralph Nader, Consumer activist and Samya's Great Uncle.

Nader said engineers were pressured by Boeing Management to speed up in order to compete with the Airbus A320Neo.

"In addition, we have filed a federal tort claim against the FAA," said Kevin Durkin, Clifford Law Office.

"This was a brand new aircraft delivered to Ethiopian Airlines in November, a four month old aircraft. The faulty sensor that precipitated this event was manufactured by Rosemount Aerospace."

According to press reports, a grand jury has been convened by U.S. prosecutors to provide information related to the certification of the 737 Max 8. The grand jury is scheduled to meet on April 12 in Washington, D.C.

“This case is a symptom of a larger epidemic where regulatory agencies lack the resources to carry out their obligations, leaving compliance with safety regulations to the whims of corporate executives eager to circumvent safety standards in order to gain a competitive advantage. Simply put, the watchdog can’t do his job, so he just gives the fox the keys to the henhouse to count eggs,” said Frank Pitre, Cotchett, Pietre & McCarthy, who is calling on an independent review of whether Boeing's software is safe.

"How come we were the last country to ground this plane," asked Durkin. "How can we trust Boeing to take them at their word?"

No matter what they say, all it comes down to is trust us and the answer is why?" said Adnan Stumo, Samya's brother.

"You've let us down. You've killed people when you let us down. There can't be a third crash and the only way to do this is to involve independent parties," he said.

A preliminary report of data from the Ethiopian Airlines crash said the plane's crew performed all recommended procedures by Boeing.