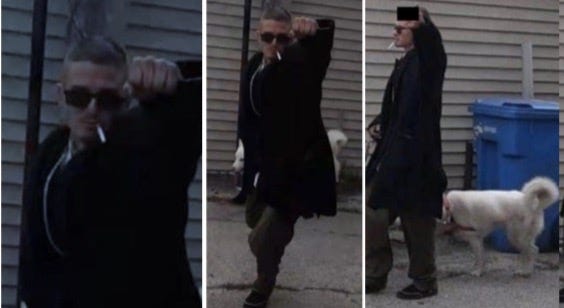 Photo credit This suspect is wanted in connection with vandalism at a Pilsen church last year, the FBI says (FBI)
By Julie Mann WBBM Newsradio 780 AM & 105.9 FM

CHICAGO (WBBM NEWSRADIO) -- The FBI has asked for the public's help in tracking down a suspect they say vandalized a church in Pilsen after making racist comments and offering a Nazi-style salute last fall.

The incident occurred around 1:30 p.m. Oct. 15, 2019 when a man tried to get into the Lincoln United Methodist Church on South Damen Avenue.

After being told the church was closed, the man "began kicking the locked glass doors, shattering both," the FBI said in an informational flyer with surveillance images.

When he was approached by employees, the man allegedly made "statements identified as racist in nature and performed a gesture described as a Nazi salute," the FBI said.

The suspect was accompanied by a medium-sized white dog with a curled tail, authorities said.