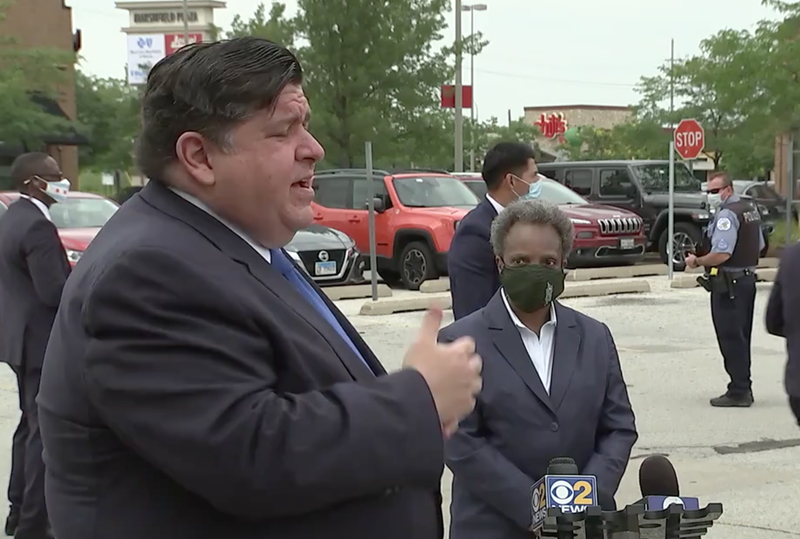 CHICAGO (WBBM NEWSRADIO) -- Governor Pritzker said he and Mayor Lightfoot talked earlier Monday as looting broke out from the North Side to the South Loop.  He said the state is offering help.

After hours of looting in Chicago, Mayor Lightfoot made it clear, "We do not need federal troops in Chicago. Period. Full stop."Governor Pritzker said he reached out to the Mayor as the looting started taking place and offered her state police to help with the closures of on and off ramps in Chicago.

"I reached out earlier this morning to the Mayor to offer our help. Last night we did, in fact, provide state police - closure of on ramps and off ramps where necessary for the city of Chicago. We'll continue to offer state police and, indeed, our state police director has been in touch not only with me, but with CPD and OECD. We want to make sure we're doing everything we can to support the city, as we did back in May and June when the looting and mayhem was occurring back then. Everything and anything we're asked to do we'll be helpful with."

Mayor Lightfoot said she welcomes help, but said that she and the Governor agree that does not mean the National Guard.  She also points to the White House, and said "I'm sure the President will have his way with this incident. But I am calling upon him to do the things that we do need. We need commonsense gun control. We cannot continue to have circumstances where anyone and their brother can go across the border or other parts of Illinois and bring illegal guns into the city of Chicago. That is something that the federal government is uniquely qualified to handle and we need the President to step up and do that. We need to make sure the ATF has adequate resources to actually do checks on gun dealers who are selling guns to straw purchases...Again, strengthening the laws so we can do effective oversight of gun dealers," she said.

President Trump has sent federal agents to Chicago and they are working in collaboration with the U.S. Attorney’s office.

Asked if he’s concerned about the possibility of these cases not being prosecuted sufficiently, the Governor responded, "Listen, criminals need to be held accountable, there's no doubt about it. I have, of course, been an advocate for police accountability and reforms. Having said that, these were criminals; people who broke in, were shooting at people...We had 13 Chicago police officers who were injured last night. This is criminal activity. Those criminals need to be held accountable," Pritzker said.