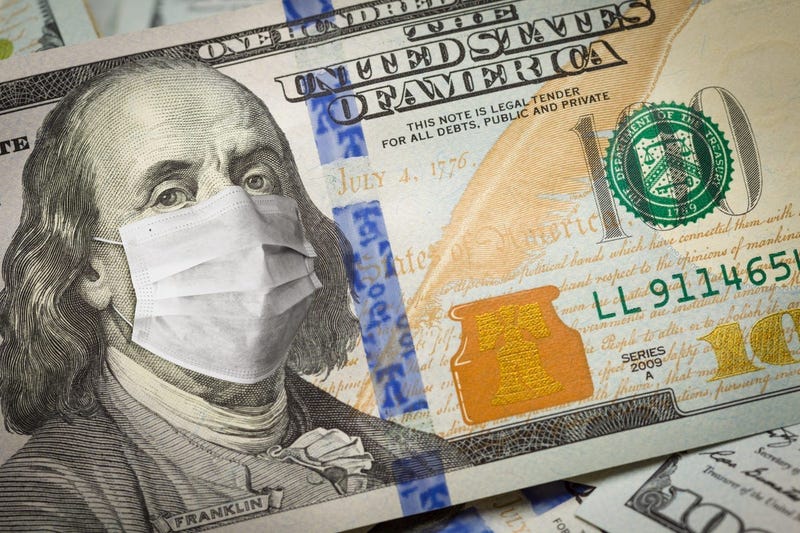 (WBBM NEWSRADIO) -- Millions of Americans have started to receive their stimulus checks, some as much as $1,200, and many of those people will use that money to pay their mortgages or rent.

But how far does a stimulus check go?

According to a new report released by Redfin, more than three-quarters of U.S. renters could pay one month’s worth of housing expenses with $1,200, compared with nearly half of homeowners.

But that might be just about all your stimulus check covers.

With Chicago’s median monthly rent coming in at $1,110, that leaves only $90 for anything else, if you are living alone. According to the report, a little more than three-fourths of renters in Chicago (76%) could cover most or all of their rent for one month. And if you have a roommate and you both receive a stimulus check for $1,200 then that number raises to 96 percent.

Nationally, nearly one third of 13.4 million US renters (31%) didn't pay their rent between April 1 and April 5, according to data from the National Multifamily Housing Council. Of more than 11 million units in the U.S. that the report covered, 69 percent of renters paid their rent between April 1 and 5. During the same period in April 2019, 82 percent of households paid their rent on time. And just the month before, 81 percent of renters paid rent by March 5, 2020.

Updated numbers found that that 89 percent of apartment households made a full or partial rent payment by April 19, up five percentage points from April 12.

“It is encouraging that apartment residents continue to meet their rent obligations whether that’s with the support of the federal relief funds, credit cards and alternative, flexible options provided by the industry’s owners and operators,” said NMHC President Doug Bibby, in a statement. “But their financial security is unclear as many may not qualify for federal relief, while others are drawing down savings and facing greater financial challenges, including higher health care costs. For that reason, lawmakers need to act now to enact a direct renter assistance program.”

As for homeowners, Redfin looked at the 50 largest metropolitan areas and ranked them by the percentage of homeowners who could cover most or all of their one-month mortgage payment, plus basic utility costs, with $1,200. Some households will receive more than one stimulus check, so Redfin also calculated the share of homeowners in each metro who could pay for most or all of a one-month mortgage payment and utilities with two checks, or $2,400.

Indianapolis, where the median monthly mortgage payment is $1,254, ranked number one. Two-thirds (66%) of homeowners there could cover most or all of their monthly mortgage and utilities with $1,200. It was followed by Louisville, KY and Birmingham, AL, both at 65 percent. On the other end of the spectrum was San Jose, CA, where the median mortgage payment is $3,371. Just six percent of homeowners there could cover their monthly costs with a $1,200 check—the lowest share of any metro Redfin analyzed. In second-to-last place was San Francisco, at 8 percent, followed by New York, at 11 percent.

“In Indianapolis, the overwhelming feeling is that when our local economy does come back, it will come back with a vengeance,” said local Redfin market manager Jake Johnson, in a statement. “With the cost of living in Indiana already so low, many residents may use the government stimulus to be good neighbors by supporting local businesses, though workers in the hardest-hit industries, such as hospitality, may use it to pay their mortgages.”

The report used data from the U.S. Census Bureau’s 2018 American Community Survey. The idea was to measure the success of the federal government’s plan to soften the economic blow of COVID-19 through direct cash payouts, according to Taylor Marr, lead economist at Redfin.

“Housing is people’s biggest expense and biggest worry right now, and so this is an attempt to answer the question: Will this payment keep people in their home or apartment?” Marr told Chicago Magazine. “Hopefully for most Chicagoans, it will.”

The report, however, doesn’t account for factors like income, a person’s number of roommates, or dependents in a household. It also focuses on rent alone, leaving out food, medicine, and other essentials.

A second round of stimulus checks could be on the way.