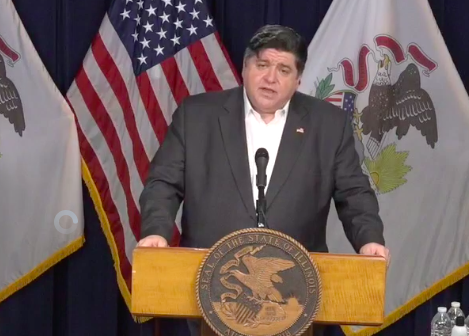 "Interrupting the season for our athletes and their fans is not a choice anyone wants to make. But when the multi-billion dollar sports leagues with multi-million dollar athletes are struggling to protect their players, it's obvious there won't be enough protection for kids on our school playing fields. The NBA has resorted to containing their players to a bubble in Orlando to press on with its season. The MLB is facing down a major outbreak just days into its abbreviated, fan-free season," Pritzker said. "This virus is unrelenting and it spreads so easily that no amount of restrictions seems to keep it off the playing field or out of the locker room; and it's very painful, frankly, for all of us to make this realization. But with rising rates of spread of the virus with rising positivity rates throughout Illinois and the entire United States, this is a situation where the toughest choice is also the safest choice."

Therefore, he said, his administration is releasing new guidance Wednesday restricting youth and adult recreational organized sports in Illinois, including, but not limited to, school-based sports, such as those governed by the IHSA and IESA, travel clubs, private leagues and clubs, recreational leagues and sports centers, and park district sports programs.

Collegiate sports and professional leagues are not impacted by these restrictions.

"I know our hearts break when we hear the word 'restrictions', especially when it comes to our children's love of for their sports. Whether this year is their first year on the court or its their senior year season. This isn't news that anyone wants to hear. But this virus remains dangerous to kids and parents and grandparents and teaches and coaches, and for right now, this is the best thing we can do for the health and safety of our families under the current circumstances," Pritzker said.

Pritzker said there are certain sports that can move forward with limited restrictions, including tennis, baseball and golf. He said the administration guidelines break down sports into three risk levels: lower, medium, and higher, based on the amount of contact between athletes and their proximity during play. The guidelines also have four different levels of play allowed based on current public health conditions, from no-contact practices that include conditioning and training at level one to full-scale tournaments in level four.

According to the Pritzker Administration, in level 1, only no-contact practices are allowed and they must be outside. In level 2, indoor and outdoor practices and intra-team scrimmages are allowed, but there can be no competitive play. In level 3 intra-conference, intra-region or intra-league play is allowed and there may be state- or league-championship games allowed for low-risk sports only. In level 4, tournaments, out-of-conference play, and out-of-state play are allowed. State championship games would also be allowed in level 4.

At the same time as Pritzker announcement, IHSA Board of Directors were meeting to discuss how fall sports should move forward.

“Daily physical activity is an important part of staying healthy,” said IDPH Director Dr. Ngozi Ezike. “The COVID-19 pandemic has upended many of our activities, including sports.  Some sports carry an inherently higher risk of exposure because of direct contact, like football and wrestling, while others have a lower risk, like golf and bowling.  As we learn to coexist with COVID-19, we must be smart and measured in how we go about it.  We want to encourage people to be physically active, but to be safe and understand the risks that come with certain activities.”

Similar to other guidance, the Pritzker Administration said sports organizations should make temperature checks available and participants and coaches should monitor for symptoms of COVID-19 and should not participate if they are experiencing illness.  If multiple individuals have symptoms or test positive, coaches or organizations should alert the local health department.  Sports organizers or coaches also must maintain attendance logs of participants for contact tracing purposes.

“Extracurricular activities and sports are an important part to a well-rounded education,” said State Superintendent of Education Dr. Carmen I. Ayala. “This guidance is not meant to be a one-size-fits all approach and takes into account the inherent risk level of each individual sport and current public health conditions.”

The state also said athletic equipment such as bats and hockey sticks should be cleaned between each use. Other equipment, including personal gear such as hockey, football, lacrosse, or other sports using helmets, pads, or gloves should only be used by one person and not shared.

“This latest guidance builds on our ongoing efforts to partner with businesses, public institutions and communities across Illinois to ensure a safe return of key activities and the reopening of our economy,” said DCEO Acting Director, Michael Negron. “Informed by the latest guidance by our public health officials, the updated youth and recreation sports guidelines will allow us to partner with recreational and competitive sports industry leaders on reducing risk and protecting our communities. Doing so will allow us to make not only a faster health recovery, but also a faster economic recovery from COVID-19.”

Illinois first issued guidelines for youth and recreational sports in late May, when every region in the state advanced to Phase 3 of the Restore Illinois plan, marked by return to work, the reopening of retail as well as the return of specific recreational activities. The latest guidelines make adjustments to temporarily halt competitive play for most higher to medium-risk sports pending further health progress, as well as to provide additional clarity on capacity limits and high school sports.

Governor Pritzker said sports are not the only risk of COVID-19 spreading.

"Let's take this opportunity to remind everyone that we are far from out of the woods; 150,000 people have died in the United States in just four months - a third of a year," Pritzker said. "As much as I would like to, this virus is not something we can just wish away. We have to act responsibly and collectively to protect the people that we love. We've made progress in Illinois, but we've also seen that it can be fleeting. And right now, things are not heading in the right direction."

He said he wants to remind everyone that it does not take long, at all, for a trajectory of success to turn into rising hospitalizations and deaths.

"If things don't change, a reversal is where we're headed," Pritzker said.

Last week, Pritzker said Illinois is seeing a rolling seven-day average positivity rate of 7.1 percent in Metro East. On Wednesday, he reported Metro East is now at 7.8 percent. And while all 10 regions, last week, fell below 5 percent, now there are six regions above 5 percent, Pritzker said.

"If you're a local elected official and your local numbers are rising, it's time to step up and impose stricter mitigations," he said. "And residents should hold their local leaders accountable. Demand they take action, because if they don't, they can send the entire region back to closed bars and closed restaurants, stricter limits on gatherings, or even another stay at home order."

Pritzker to Metro East: Three consecutive days of your positivity rate sitting at or above 8 percent, brings with it additional mitigation for the entire region. That could mean the closure of bars, the reduction of service at restaurants, and smaller capacity caps for other activities. Should that region continue in that direction, I will be making additional announcements related to the specifics of the reversal.

"Folks this is serious. It did not take long for Florida, Texas, Arizona, and California to become plagued with high rates of infection and death. That was once where we were just 10 weeks ago. We hunkered down, we did the right thing, and we made progress, but now there are danger signals, as states all around us are spreading the virus, and some of our own people in Illinois haven't gotten the message about wearing masks and abiding by mitigations," Pritzker said. "It is time to defend our progress and put us back on the right trajectory for a healthier and safer Illinois."

Taking precautions, following mitigations like wearing masks in public places, keeping some physical distance, and refusing to indulge those who flout public health guidance - these are the best things that you can do, Pritzker said, to keep the economy moving forward, and looking out for friends and family.

"This is not about politics, or what party your governor belongs to, or whether this is how you wanted to spend your summer, or your fall. This is about doing right by the people that we love," Pritzker said.

"Unfortunately, as the Governor said, we are seeing what much of the country is seeing in terms of a resurgence in the number of cases. Not only have we seen an increase in the number of cases over the past several weeks, but we are also seeing a slight increase in hospital admissions, as well," she said. "These are clear indicators that we are heading in the wrong direction. And six of the 11 regions in Illinois, we have seen an increase in positivity in seven of the last 10 day period."

Dr. Ezike said the virus "does not recognize county lines. It does not respect any regional boarders. The virus is spreading throughout Illinois, and more counties are heading into a warning-level status."