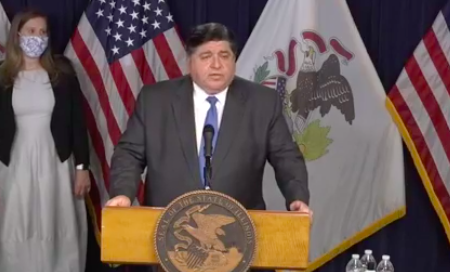 Is has not been since May 25 when Illinois saw this many new cases. Back then, 1,713 new cases were reported and Illinois was coming down from its peak.

Now, there are warnings from Governor Pritzker and top state public health officials that if coronavirus numbers keep trending up, the state may have to revert, temporarily, to more restrictions on public gatherings.

Governor Prtizker warned Thursday that the state is again at a “danger point.”

“I would say that we’re at a danger point, everybody. Pay attention,” Pritzker said. “Now is the moment to wear your mask properly...And for people who aren’t wearing masks, please start now. It is never too late. Start now.”

Pritzker said things are not heading in the right direction, and if hospitalizations continue to rise, Illinois may have to take a step back. He said it is simple to avoid going there though.

"Wearing a mask is like wearing a seatbelt. It's required and it saves lives," he said.

He also encouraged people to practice social distancing and to wash their hands frequently to slow the spread of the virus.

In total, there are now 176,896 confirmed cases, including 7,478 deaths, across the state, according to the Illinois Department of Public Health.

The state’s positivity rate remains at 3.8%, where it’s stayed for the three last days.

Hospital admissions for coronavirus have begun to rise again, too, officials warned Wednesday. They said that’s a sign Illinois is headed in the wrong direction.

As of Wednesday night, 1,452 people in Illinois were hospitalized with COVID-19, health officials said.  Of those, 353 patients were in the ICU and 149 patients with COVID-19 were on ventilators.

“We cannot continue to increase back to where we were,” said Director of Illinois Department of Public Health Dr. Ngozi Ezike, at a press conference on Wednesday.

Coronavirus fatigue is real, Ezike said, but that does not mean the virus is over. Dr. Ngozi Ezike said wearing a mask and keeping your distance might not win you a popularity contest, but they are the right things to do.

"I have talked to friends who said they have felt since no one else was wearing a mask they felt uncomfortable putting on theirs. If adults can't overcome the peer pressure to wear the mask, I am not sure what we expect from our kids, so we have to set the right example," she said.

Pritzker on Wedneday also said to the people in the parts of the state where the virus is surging, "If you're a local elected official and your local numbers are rising, it's time to step up and impose stricter mitigations. And residents should hold their local leaders accountable. Demand they take action, because if they don't, they can send the entire region back to closed bars and closed restaurants, stricter limits on gatherings, or even another stay at home order."

He reminded everyone that "we are far from out of the woods." Pritzker said 150,000 people have died in the United States in just four months - a third of a year.

"As much as I would like to, this virus is not something we can just wish away. We have to act responsibly and collectively to protect the people that we love. We've made progress in Illinois, but we've also seen that it can be fleeting. And right now, things are not heading in the right direction."

He said he wants to remind everyone that it does not take long, at all, for a trajectory of success to turn into rising hospitalizations and deaths.

"If things don't change, a reversal is where we're headed," Pritzker said.

"Folks this is serious. It did not take long for Florida, Texas, Arizona, and California to become plagued with high rates of infection and death. That was once where we were just 10 weeks ago. We hunkered down, we did the right thing, and we made progress, but now there are danger signals, as states all around us are spreading the virus, and some of our own people in Illinois haven't gotten the message about wearing masks and abiding by mitigations. It is time to defend our progress and put us back on the right trajectory for a healthier and safer Illinois."

Taking precautions, following mitigations like wearing masks in public places, keeping some physical distance, and refusing to indulge those who flout public health guidance - these are the best things that you can do, Pritzker said, to keep the economy moving forward, and looking out for friends and family.

"This is not about politics, or what party your governor belongs to, or whether this is how you wanted to spend your summer, or your fall. This is about doing right by the people that we love," Pritzker said.