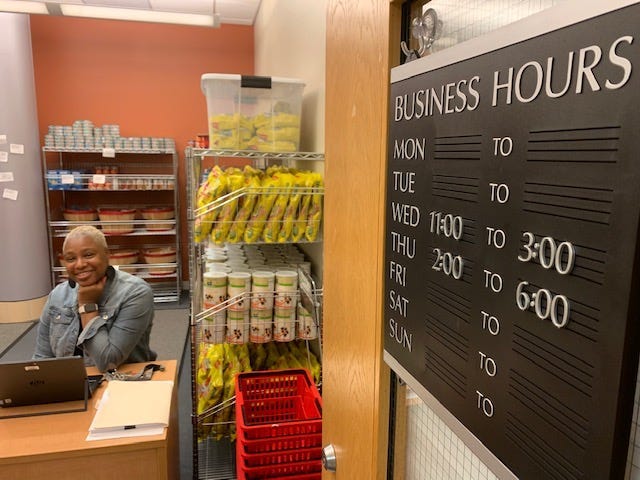 CHICAGO (WBBM NEWSRADIO) -- Rashan Morris, 22, is studying communication and media at Kennedy-King College in Chicago's Englewood neighborhood. In between classes, he made his first trip to the new Healthy Student Market.

"I've only been here five weeks," Morris said. "When I found out about this place, I thought, 'Wow, free food?' That's awesome."

Morris is one of about 30 students who stop by each day since the pantry opened a month ago.

"I love that they have variety. It's all nutritional, not like fast food." he said.

A personal shopper helps each student pick out a variety of non perishables.

"We have everything from cereal, oatmeal, a number of canned vegetables, sweet peas, corn, a number of canned fruits, pears, peaches, macaroni and cheese. We even sometimes have peanut and jelly," said Michael Johns, director of student activities at the Kennedy-King Englewood campus.

"What City Colleges found was that there were a number of barriers students are facing while they're going to school and hunger was one of those barriers. With that in mind, they partnered with the Greater Chicago Food Depository and created these food pantries on campus in hopes to eliminate that barrier for them while they're here," Johns said.

Each pantry is staffed by a student and a volunteer at the front desk.

"I've been going to school here for a year and found out about the food pantry last week. It's great for people who don't have food," Catchings said.

"I like fruit so this makes a difference for me. I'm going to make lasagna tonight," he laughed.

Johns hopes to turn around the stigma that often times comes with hunger.

"Some people may feel embarrassed to come into a food pantry. We want to make it a lighter experience for them. There's nothing wrong with asking for help and get the support you need to be successful." Johns said.

Kennedy-King College is the sixth out of seven schools in the City Colleges of Chicago network to open a permanent Healthy Student Market and it was made possible through a partnership with the Greater Chicago Food Depository. City Colleges' Olive-Harvey campus will open its food pantry next month.

The Healthy Student Market is in the Y Building at Kennedy-King College and operates on Wednesdays from 11 a.m. to 3 p.m. and Thursdays from 2 p.m. to 6 pm. Kennedy-King serves about 3,000 students.