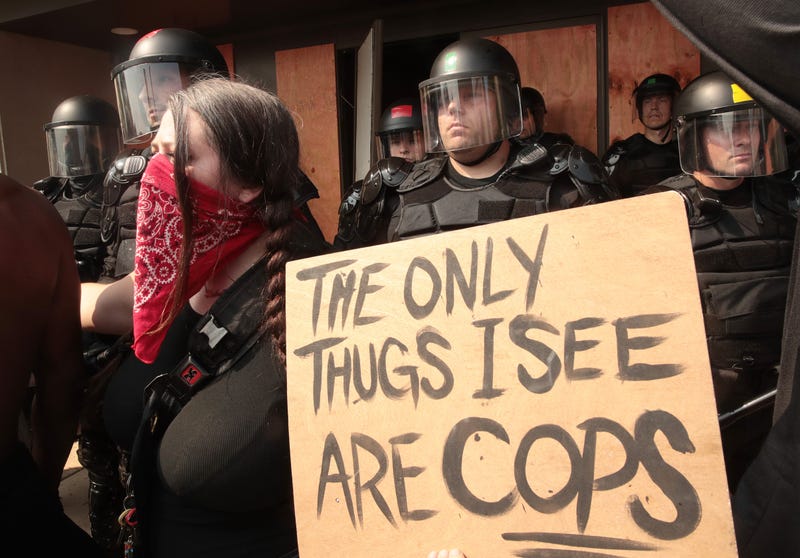 CHICAGO (WBBM NEWSRADIO) -- Wisconsin’s attorney general said his office should wrap up its investigation into Jacob Blake’s shooting by Kenosha police sometime next month.  Attorney General Josh Kaul said his office will present to the Kenosha County District Attorney a final report on the Jacob Blake shooting in the next 30 days.

"Our job is to gather the evidence as completely and thoroughly as possible, and provide that evidence to the district attorney’s office," Kaul said.

Kaul identified the officer who shot Blake seven times in the back as Rusten Sheskey.

The Attorney General said police had first unsuccessfully used a Taser on Blake, before Officer Sheskey shot him; and that Blake had admitted to the officers during their initial investigation that he had a knife. A knife was found on the floor of Blake's SUV.

But, the investigation does have one major blind spot.

"The Kenosha PD does not have body cameras, and therefore, the officers were not wearing body cameras," Kaul said.

Wisconsin Attorney General Josh Kaul said the U.S. Justice Department has also begun a civil rights investigation into the shooting, and expects to provide a report to prosecutors in the next month.

According to a release from the Wisconsin DOJ, officers from the Kenosha Police Department were dispatched to the area on Sunday after a caller reported that her boyfriend, who was not supposed to be on the premises, was present.

The release did not specify what role Blake played in the original incident, but family attorney Benjamin Crump said he was attempting to break up a domestic dispute. Officers attempted to arrest Blake during the incident and used a Taser in an unsuccessful attempt to subdue him, the DOJ said.

As depicted in a video of the interaction, Blake walked to his SUV and opened the driver's side door. Officer Sheskey, 31, grabbed Blake's shirt and fired his service weapon seven times into Blake's back, the DOJ release said.

The release noted that no other officer fired their weapon, and that none of the officers were wearing body cameras because the department does not have any. All of the officers involved in the incident have been suspended.

According to the DOJ, Officer Sheskey has worked with the department for seven years.

Jacob Blake remains in the hospital. His father, as well as attorneys for his family, said he is now paralyzed.

The police shooting of Jacob Blake sparked protests in Kenosha that began Sunday night and have continued since. Tuesday night's protest turned deadly when two people were fatally shot and another was wounded. A 17-year-old suspected of being the shooter was arrested Wednesday in Illinois.