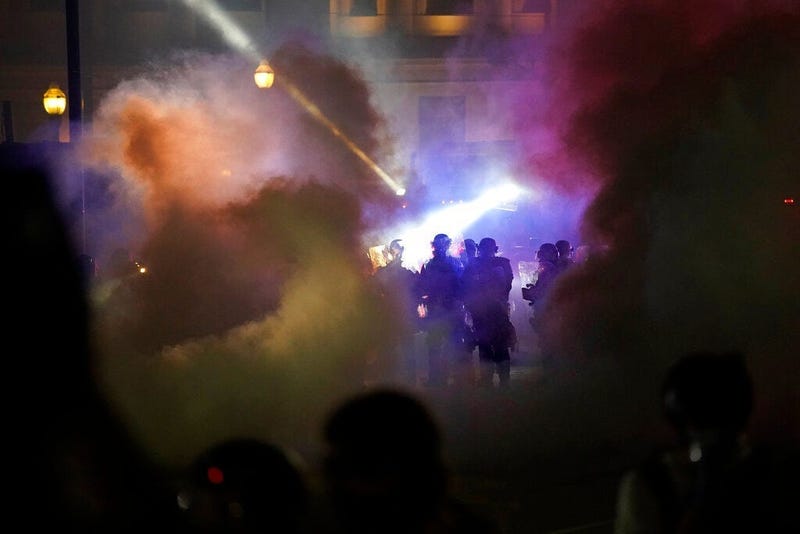 Two people were fatally shot, and at least one other was injured during a third night of unrest Tuesday in Kenosha over the police shooting of a black man, Jacob Blake; and Kenosha Police said authorities were looking for a man armed with a long gun.

Earlier Wednesday, Kenosha County Sheriff David Beth told the Milwaukee Journal Sentinel that one victim had been shot in the head and another in the chest late Tuesday, just before midnight. The third victim's wounds were not believed to life-threatening.

He said that investigators had reviewed footage of what happened and that he was confident a man would be arrested soon.

“I feel very confident we’ll have him in a very short time,” Beth said.

The incident occurred at about 11:45 p.m. in the area of  63rd Street and Sheridan Road, Kenosha police said.

The shooting took place near a gas station, where armed men had been protecting the property from demonstrators.

The protesters moved there after having been involved in a confrontation with police near the county courthouse downtown that lasted for hours. Witnesses said police responded with tear gas and rubber bullets, after protesters threw water bottles, rocks, and fireworks at police.

The sounds of gunshots sent people running and looking for places to hide. Social media footage appears to show at least three people were shot.

WBBM Newsradio's Jim Gudas was there earlier Tuesday night, as protesters marched in the streets of Kenosha, chanting "Jacob Blake" and "What do we want? Justice! And when do we want it? Now!"

Jair Hayes of Kenosha was among the protesters and defended the unrest and looting following the shooting of Jacob Blake.

"How do you pick brick and mortar over life? And so you are asking me what do I think about the protests? I think they should continue," Sherman said.

Also at the protest were about 10 to 15 Kenosha residents armed with pistols and rifles, who said they were there to protect property and lives, because the police and the National Guard couldn't be everywhere.

Among them was Kevin Mathewson, a former alderman in Kenosha.

Aaron Petroski was another one armed.

"This is simply every day citizens that said, 'you know what, enough is enough right now,'" he said.

Beth told the Milwaukee Journal Sentinel that armed people have been patrolling Kenosha's streets in recent nights, but he did not know if the shooter was among them.

“They’re a militia,” Beth said. “They’re like a vigilante group.”

The Journal Sentinel reported a widely shared video shows a man sprinting into a lot at 63th Street and Sheridan Road, carrying a long gun. Someone pursuing him appears to throw something toward him. Multiple gunshots are heard.

Another video, posted to Twitter by Shelby Talcott of the Daily Caller, shows a gunshot victim lying in the parking lot. The victim, who appears to be the man who had been pursuing the gunman, has been shot in the head.

Other videos show a man who seems to be the same man wielding a long gun while running north on Sheridan Road, being pursued by people screaming that he shot someone. He falls to the ground and fires the gun at people who seem to be trying to disarm him. While on the ground, he appears to shoot two of them, one in the torso and another in the arm.

It was unclear if there was more than one shooter. Beth told the Milwaukee Journal Sentinel he did not know.

Officials asked that anyone who witnessed the shootings contact the Kenosha Police Department Detective Bureau at 262-605-5203. Callers wishing to remain anonymous can contact Kenosha Area Crime Stoppers at 262-656-7333. Police are also asking for videos and photos of the incident that have not already been circulated on social media.

The shooting of Jacob Blake was captured on cellphone video and ignited new protests over racial injustice in the U.S. just three months after the death of George Floyd at the hands of Minneapolis police touched off a wider reckoning on race.

The Associated Press reported, Kenosha police have said little about what happened, other than that they were responding to a domestic dispute. They have not said why the officers opened fire or whether Blake was armed, and they have not disclosed the race of three officers who were on the scene.

Blake’s father, also named Jacob Blake, said that his son had eight holes in his body and that he was paralyzed from the waist down.

Wisconsin Gov. Tony Evers called in up to 250 members of the National Guard and declared an emergency ahead of Tuesday night's violence. The night before, crowds destroyed dozens of buildings and set more than 30 fires downtown.

“We cannot allow the cycle of systemic racism and injustice to continue,” said Evers, who is facing mounting pressure from Republicans over his handling of the unrest. “We also cannot continue going down this path of damage and destruction.”

Anger over the shooting has spilled into the streets of other cities, including Los Angeles and Minneapolis, the epicenter of the Black Lives Matter movement this summer following Floyd's death.

(WBBM Newsradio and The Associated Press contributed to this copy.)

music
Looking back on the surfing days of Bruce Springsteen
music
Everything we know about Eric Church's triple album
sports
Deion Sanders didn't show up to draft meetings with Lions because he didn't want to go to Detroit
sports
Patrick Mahomes on idea he is chasing Tom Brady: 'It's going to be hard to do'
music
Are concerts cancelled again for 2021?
sports
Weekend betting recap: Dustin Poirier KO of Conor McGregor massive win for sportsbooks