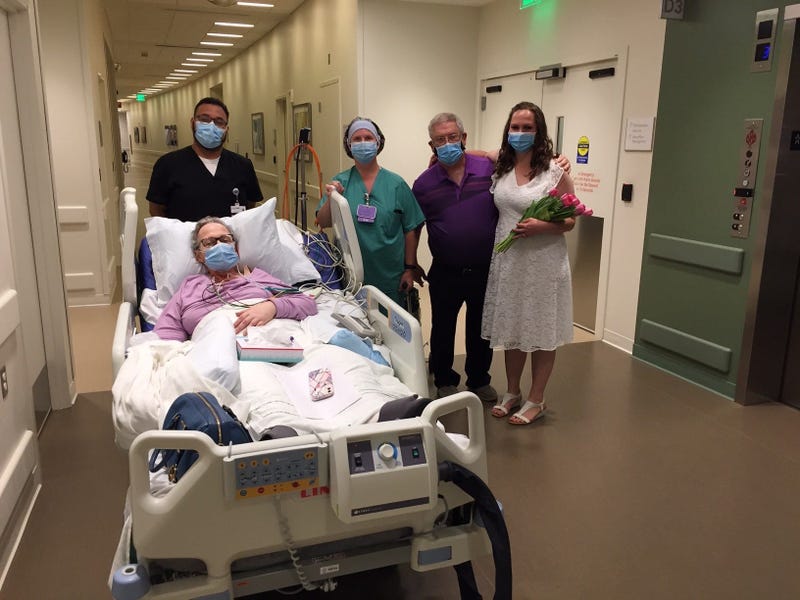 CHICAGO (WBBM NEWSRADIO) -- Karen Hoehne knew she didn't have much time to live.

Diagnosed with terminal ovarian cancer, she wanted to see her daughter get married. She also had been battling breast cancer for the last eight years.

"We were supposed to get married in November. Then COVID hit, so we postponed until May of next year," said Alyssa Sutherland, Hoehne's daughter.

Sutherland and her husband got engaged in February. But a few months ago, they learned her mother's cancer was terminal and scheduled a small ceremony in the backyard of her parents' house in Libertyville.

"Then about two weeks ago, she was rushed to the hospital. She was fine in January, all the scans were fine. So to go from that to terminal in a matter of a couple of months was very hard to accept," Sutherland said.

"The hospital didn't even think she was going to make it through the day. She pulled through. She said let's postpone it a week, I'll be better, I'll be there for it."

That's when the staff at Lake Forest Hospital stepped in.

"It turned out better than we could have hoped for. It was a rollercoaster of emotions that week," she said.

Karen Hoehne was wheeled down from the intensive care unit in her hospital bed to the courtyard on June 27, where about a dozen people gathered to witness the first outdoor wedding in the history of the hospital building.

"It brings back the memories from that day and the happiness in her eyes and how proud she was. We are so thankful for the hospital and what they were able to do. It was the one thing she was really wanting before she wasn't going to be here any longer. It was beautiful day and I'm forever thankful my mom was able to be there. Without the hospital we wouldn't have had that day and had that memory with her," she said.

"Knowing that they made her last dream come true is unbelievable," Sutherland said.