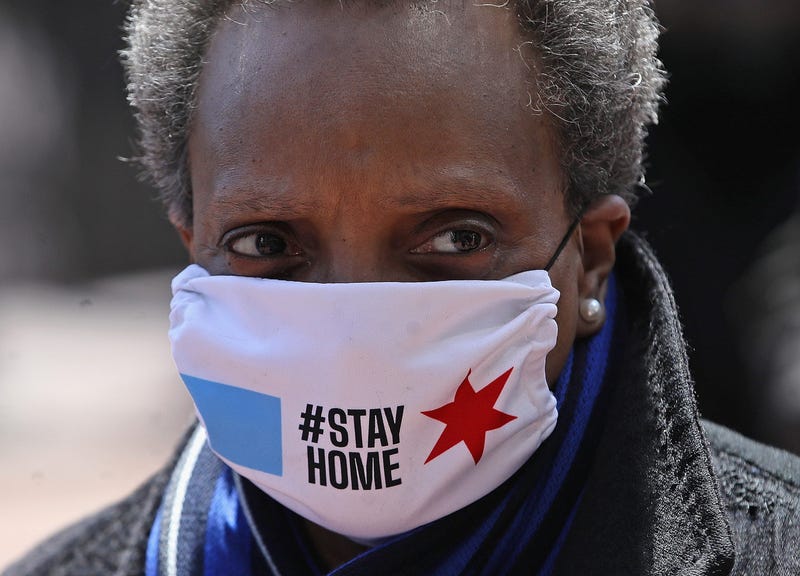 "Our reopening process will be like slowly turning a dimmer switch, and not flipping a light switch. Yet, while our health metrics don't allow us to transition into Phase 3 as we stand here today, given the trajectory over these past few weeks, I am please to announce that we are preparing for Chicago to take the first step in early June. All the sectors that we are announcing today need to be prepared to open," Mayor Lightfoot said in a Friday news conference.

Before providing an update on the city's COVID-19 metrics, Mayor Lightfoot said she wanted to make two things clear. First, although she is aware of Governor Pritzker's plan to lift restrictions the stay-at-home order on May 29 - "and believe me this is welcomed news to all of us" - COVID-19 is not magically disappearing on May 29, she said.

"The science-based health guidance that has informed all of our response in the last two months will continue to guide us until this pandemic is over. We don't have a crystal ball, but we are looking daily at the data, and I cannot give you a date certain on which our transition to Phase 3 will happen. The best I can say right now is we are hoping, and believe it will be in early June," Lightfoot said. "Now I know not having a certain day may be frustrating, but it is just a little more time and I know that we can do this. But we have to be smart and careful, the way we have been over these last two months."

The second thing she wanted to make clear is the other part of the equation: you.

"While our projections may allow us to safely enter into Phase 3 in early June, we will remain in Phase 2 if those projections take a different turn. It goes without saying that I hope that won't be the case. But a lot depends upon the steps that you take between now and then. The health and safety of our residents has always been and will continue to be our singular North Star when dealing with this crisis. It is for that reason that despite many businesses and public amenities that we hope will be partially reopening in June," Lightfoot said.

The Mayor said Phase 3 will still require everyone to wear face coverings in public and to maintain social distancing. There will still be a limit on social gatherings of 10 or fewer people. Anyone who is sick must stay home, as well as anyone who has come in contact with someone who has COVID-19. Those with COVID-19 symptoms must immediately reach out to a healthcare provider. Elderly residents and residents with underlying medical conditions are advised to continue to stay home.

"These are all really, critically important parts of Phase 3, Phase 4, and onward until we have a vaccine. We have to be smart. We have to do the right thing, even as we start to gradually reopen," Lightfoot said.

Dr. Arwady said in March, Chicago was worried, as it saw a steep uptick in cases similar to New York. But in May, the curve started to flattened.

"We are beginning to feel confident that we are starting to get on the other side of the peak," she said.

In terms of testing, Dr. Arwady said more is needed.

"You will recall, we set a goal to test five percent of Chicago residents every month to move to stage 3. That works out to 4,500 tests a day. We are now up to 4,300 tests per day, so nearly to the 4,500. As you know, the city in partnership with CORE, stood up for additional testing sites and are standing up for more in the neighborhoods that are hardest hit to make sure that we get to this really important goalpost - that is not our final goalpost, but that is our goal moving towards stage 3," she said.

In looking at percent positivity - the number of positive tests divided by all the tests that have been done - Dr. Arwady said this is about congregate settings, "our riskiest settings," such as long-term care facilities, nursing homes, jails and other correctional facilities, homeless shelters, "if we look back to the beginning of April, we were seeing positivity rates as high as 80 percent initially. This has been a major focus in the health department...We set a goal of 30 percent positivity, and actually most recently, we are at 10 percent positivity, so that is really good progress in our highest risk settings.

"And looking into the community setting, here we are at 20.5 percent positivity. We have set a 15 percent goal there. And this is the one we look at very closely to do things like drive testing to particular parts of the city, work with clinics to say 'if you are still seeing more than 15 percent positivity, we need to drive testing up.' Overall, as a city we are at about 19 percent positivity where we combine these together, but we do want to see this come down even further. This of course reflects the risk to average Chicagoans who are out and about in the community, and we know that there are still neighborhoods and community areas where this in particular is really high.

Lightfoot said Phase 3 will include adjustments to guidelines for capacity levels in businesses and other areas. The city did a reopening survey that gathered nearly 57,000 responses from across the city.

"We heard that your toughest challenges were, not surprisingly, a lack of social interaction," Lightfoot said. "We also heard how hopeful you are about the future; that your top priority is seeing parks open, followed by having restaurants open. We also heard creative and innovative ideas on how to go about this, which we look forward to putting into action."

Lightfoot said the city is making "key progress" and expects to move into Phase 3 "sometime in early June. But for that to become a reality, we have to stay the course to avoid the surges that we've seen elsewhere in the country."

The Mayor said to help get the city ready for Phase 3, she has been working closely with various partners across the city, from the faith community to industry leaders, in order to develop specific sector guidelines, which address two key questions: How will you keep employees safe? How will you keep customers and the public safe?

Lightfoot said the plans remain a work in progress and she plans to unveil detailed guidelines next week.

"Now, assuming our metrics continue trending in the right direction, here are some of the types of businesses, industries, and recreational activities that we will expect to open with capacity limitations are we enter the first steps of Phase 3..." Lightfoot said.

These include childcare and in-home family daycare, as well as our park facilities west of Lake Shore Drive, libraries...we are also on track to opening office space jobs, professional services, and real estate services with capacity limitations, along with hotels, lodging, and limited outdoor attractions, including non-lakefront golf courses. Restaurants will also reopen, including coffee shops, with a focus on outdoor space. As well as non-essential retail stores and personal services such as barbershops, hair and nail salons, "with appropriate health precautions in place," Lightfoot said.

"These limited reopenings will be in addition to the industries that will continue to be open or will expand operations in Phase 3; and those include vital pillars of our economy, such as manufacturing, construction, and warehousing, hospitals, dentists, and federally-qualified health centers and community mental health centers; as well as public transit, regional transit, rideshare, and taxis. And public facing city services, and yes, we do expect to open up City Hall in early June," Lightfoot said.

"There are also a number of sectors that we very much hope to reopen in Phase 3, but which we are still developing safety guidelines and will remain closed for now. Again, this process is like turning a dimmer switch, not flicking a light switch."

Additional businesses Lightfoot hopes to bring online at some point in Phase 3 include summer programs and youth activities, religious services, gyms, and the lakefront and beaches - "all hopefully later in June."

"We are hoping to open boating during Phase 3, but congregation among boats will not be permitted. I am sorry folks, the Playpen is not going to be open this summer," Lightfoot said.

"Now I know everyone is anxious to our our lakefront itself reopen, but at this point we are simply not there yet. But we are working hard to get to that point. And when it does open...it will begin with very tight limitations on numbers, duration of use, and an emphasis on movement. Despite all these steps forward during Phase 3, there are still a number of sectors unfortunately we expect to remain closed for the time being. These include our schools, playgrounds, bars and lounges, as well as large venues, such as stadiums, theaters, music venues, conventions centers will remain closed for now," Lightfoot said.

"We do, of course, want to see all of these return, and they will, but we are simply not ready, yet."

Lightfoot said, moving into Phase 3 does not mean the crisis is over.

"We do not want to experience a resurgence in cases. It's not just a risk; it's a real possibility. Every place else that we've seen across the world and across the country that's opened prior to this point has seen a surge in cases. If that surge happens, we're not gonna hesitate to take the steps that are necessary, even including moving back to the restrictions we're all living under now in Phase 2. Whether or not that surge occurs, really depends on all of us, all of you continuing to be safe, smart, and responsible."