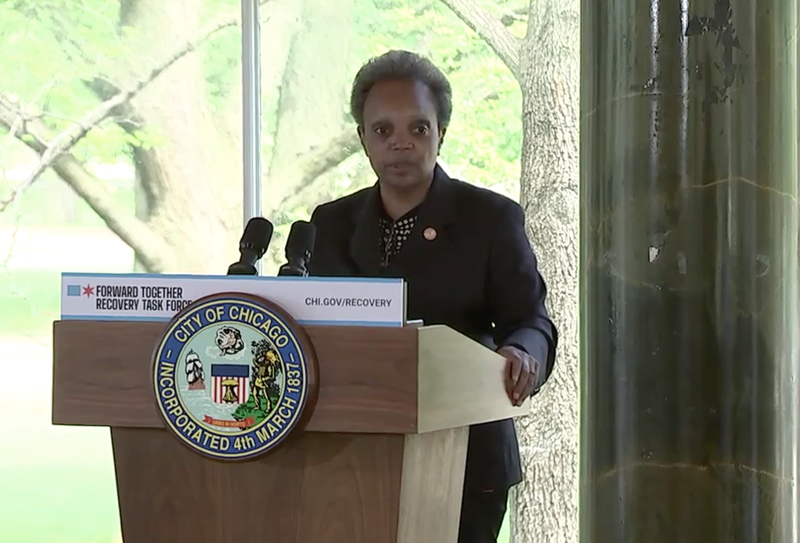 The report was compiled by the COVID-19 Recovery Task Force, which was established in April and was co-chaired by Mayor Lightfoot and former White House Chief of Staff Samuel Skinner and involved a group of more than 200 industry experts, regional government leaders, community-based partners, and policymakers.

Read the full advisory report below:

Over the past 10 weeks, the Task Force members assembled a change study and an advisory report to provide critical insights to help Mayor Lightfoot as her administration works to "balance a robust health response with a strategic economic and social response that addresses the unique challenges presented by COVID-19 – many of which underscore the challenges the city faces in the form of structural inequities," the city said in a release.

“I am deeply grateful for the hard work of the Recovery Task Force, and their commitment to doubling down on our mission of building a better Chicago that ends economic hardship, confronts racial inequities and unites all of the city’s residents,” said Mayor Lightfoot. "With their invaluable contributions we will transform the COVID-19 crisis into the once-in-a-generation opportunity that it presents to eliminate the deep, glaring chasms of inequity it has brought to the surface. While we don't know when this crisis will end, we do know that our recovery from it will not be reached with any short cuts or half measures."

The Task Force developed a set of 17 recommendations and four existing initiatives to advance a targeted set of outcomes for Chicago.

Outcome #3: Build on our region’s strengths

Outcome #5: Reignite activity throughout Chicago by sharing our story

While the implementation of several of the recommendations is already underway – and many others will be implemented in a phased approach over the next few years – the city’s COVID-19 recovery efforts will be grounded in the crucial work the Lightfoot administration has started to address the structural economic forces that put millions of Chicago residents in economic hardship prior to the pandemic, the city said in a release.

“Thanks to the efforts of many people within many units of local and state government, non-for-profit organizations, organized labor and small and large business organizations we have an outstanding plan of action for the recovery and growth of Chicago and the greater Chicagoland region,” said Samuel Skinner. “It is now time for all of us to work together to implement this plan of action with upmost speed. Chicago, the city of big shoulders, has successfully faced great challenges before, and we will do so again.”

The Task Force, which was comprised of five working groups, also developed policy recommendations and specific plans for the Lightfoot administration. In recognition of the fact that Chicago’s economy is interconnected with that of the region, as well as the state, these subgroups also included participants representing the Chicagoland regional economy.

The working group co-chairs are below, and a list of all Task Force members can be found here.

“The partnership across the public and private sectors has resulted in innovative ideas that leverage the city’s natural resources, world-class institutions and existing infrastructure to drive economic recovery for all Chicago residents. As a lifelong Chicagoan, it was a privilege to work alongside Mayor Lightfoot and the Recovery Task Force members in support of our city,” said Jenny Scanlon, CEO, UL.