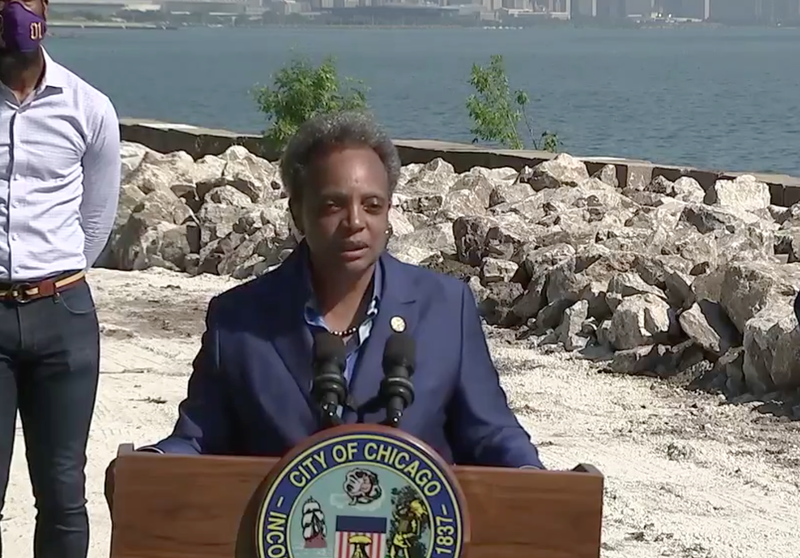 CHICAGO (WBBM NEWSRADIO) -- Mayor Lightfoot was standing in front of a live microphone when she first heard about the Supreme Court's DACA ruling.

Mayor Lori Lightfoot was taking questions after a Thursday press conference to celebrate the upcoming reopening of the lakefront when she learned about the ruling. A reporter asked her "can you weigh in on the Supreme Court's decision to block President Trump's end to DACA, calling it arbitrary?"

The Mayor was clearly moved when she learned of the Supreme Court ruling.

"I hadn't heard this good news. And it is truly...It's good news. I'm grateful," Lightfoot said holding back tears. "There are so many young people who contribute in incredible ways to the vibrancy of our country. They deserve and have the right to be here, and I am grateful. I'll have to get right in on the full decision, but it's a great day. It's a great day. I'll have more to say."

Reporter: Chief Justice John Roberts joined the court's Democratic appointees in a 5-4 decision that found the Trump Administration's move to wind down DACA lacks sound legal basis. What the impact in Chicago?

"I think the impact is huge. There are so many young people who are DACA-eligible and who have been hanging on by a thread and really not knowing what their future was going to hold, worrying about going away to another country that they have no memory or knowledge of. And so, I think this ruling really speaks to the importance of supporting unequivocally immigrant and refugee rights. You know that we are a welcoming city. We will always be a welcoming city. And being a welcoming city doesn't mean taking half measures. We must, we must protect all of our immigrant and refugee communities, and particularly our young people. I am overcome with joy and relief for them. We had no idea which way the pendulum was going to swing and we were unfortunately preparing for the worst. I am glad on this bright June day that we have something more to smile about," Lightfoot said.

"This is important for our city. And really, I think, will give these young people a measure of comfort and support that they can live their true authentic lives in our city, all across the country, and not worry about being hidden in the shadows and being denied their opportunity to pursue their God-given talents and passions."

Mayor Lightfoot said she believes it will go down as one of the most important decisions in the history of the Supreme Court.

"This is an important, important ruling. I think it will go down as one of the most historic rulings in the history of the Supreme Court, and I am overjoyed that this decision has been rendered," she said.