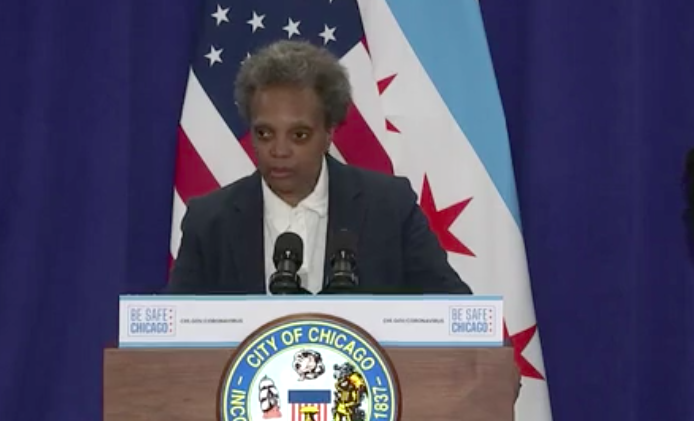 CHICAGO (WBBM NEWSRADIO) — Chicago Mayor Lori Lightfoot on Friday lashed out at President Trump with an implied expletive after the president’s controversial comments about social unrest in Minneapolis.

“I will code what I really want to say to Donald Trump. It’s two words. It begins with F and it ends with U,” Lightfoot said at a media briefing to discuss reopening plans in her city.

The mayor was talking about the racially charged death of George Floyd, 47, a black man who died after being arrested by Minneapolis police. Video of a white officer kneeling on Floyd’s neck went viral; in it, Floyd said he couldn’t breathe.

Trump has expressed sympathy toward Floyd's family. But in a censored tweet, he suggested protesters in Minneapolis could be shot if they are looting. Lightfoot said the president's message was "profoundly dangerous" meant to "inflame racist urges."

Lightfoot said demonstrations were expected in Chicago in the wake of Floyd's death. She said protesters should take precautions because of the pandemic.

"Folks, please march, exercise your rights, but wear face coverings. Bring hand sanitizers," she said. "Ensure distance between one another even as you're marching. If you feel sick, please, stay home. And remember that you could also be COVID-positive and be asymptomatic."

Illinois Gov. JB Pritkzer also weighed in Friday about Trump's reponse to the upheaval in Minneapolis.

“From the very moment that I announced my decision to run for governor three-plus years ago, I said that this president was a racist, misogynist, a homophobe, a xenophobe. And I was right then and I’m right now,” he said.

The Democratic governor has been at odds with Trump, a Republican, in recent weeks over the White House’s handling of the COVID-19 pandemic.