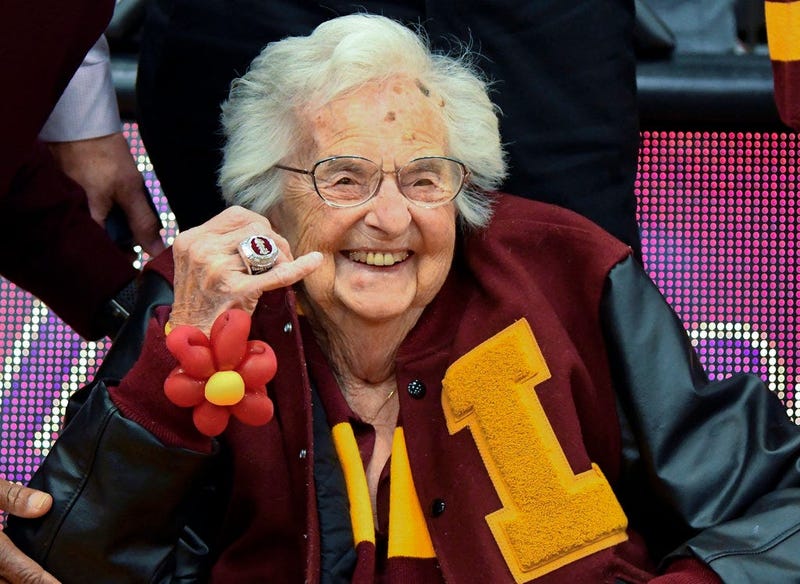 (WBBM NEWSRADIO) -- Loyola University’s Sister Jean is celebrating her birthday, but like so many things in 2020 this year’s party will look different.

The university is throwing a virtual celebration on the nun’s 101st birthday, next Friday, Aug. 21, at 11 a.m.

Unlike when she marked a century last year, there will be no in-person greetings from the likes of Gov. Pritzker.

Instead, university officials are asking staff, current and former students and members of the public to submit their No. 1 reason for loving Jean Dolores Schmidt, better known as Sister Jean.

The comments about Sister Jean may be included in a book.

The virtual birthday party will be held via Zoom and YouTube, if it exceeds the three thousand person limit, assistant director of alumni relations Pedro Guerrero says.

The celebration will include two of Sister Jean’s favorite things,  cake and ice cream.

Guerrero says if you can’t make it, you can always share a picture of birthday dessert on social media, with this hashtag: #SisterJean101.

A mass will be held in honor of Sister Jean on Wednesday at noon.

Sister Jean, who is the men’s basketball team chaplain, drew national attention in 2018 as the Ramblers made the NCAA’s Final Four.