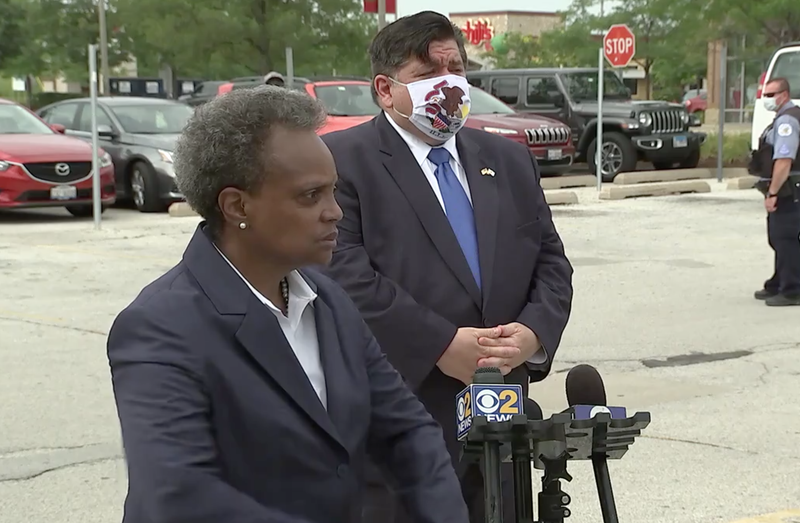 "This wasn't an exercise of First Amendment rights. This wasn't actions of people who were poor and trying to engage in activity to feed their families. Unfortunately, friends, this was straight-up criminal activity and looting in our downtown, and we will just not tolerate it," Lightfoot said.

The Mayor announced that the superintendent and his team have already activated a group of officers who are working to identify more suspects. She added more than 100 arrests were made overnight.

"And I'll just say this in closing: People in our neighborhoods, our residents, deserve to be safe. Businesses and their employees deserve to be safe and their property needs to be secure. And our police officers deserve the support and to be safe in the neighborhoods. We will not tolerate a circumstance where our residents, our businesses, our property, and our police officers are under siege by those who don't care about themselves, don't care about their communities, and care nothing about the damage that it does to our city," Lightfoot said. "We are going to stand tall; people of goodwill, which far out-number those who do not. We will stand up, one together to make sure that our city continues to be strong and vibrant and we will hold those accountable who want to go in a different direction. That will not happen in the City of Chicago, and our residents, our police officers have our respect. They deserve it and we will have their back and make sure we hold those accountable and bring them to justice."

In taking questions, the Mayor was asked about the specifics of the lockdown Superintendent Brown announced earlier Monday, closing the downtown area from 8 p.m. to 6 a.m. Will there be CTA service? Will bridges over the Chicago River be raised and expressway ramps closed?

"We are working on the specifics now, but certainly it's gonna include some elements of that. We're working with the CTA. We're looking at the bridges. But we want to make sure, obviously, people who work and live downtown have easy access to the downtown area. We are going to make sure we do everything we can. In addition, we are sending resources out to neighborhoods, really activating a multi-layer plan that we developed in early June following the unfortunate incidents of late May, early June. So I feel we have a very robust plan, both for the downtown, but also towards all the neighborhoods.

"Let me also just say, because there continues to be a lot of Twitter traffic that I think is unfortunate. Number one: the individual who fired upon the police yesterday and was taken into custody was a 20-year-old man. He was not a juvenile and was not unarmed. Officers responded because they received a 911 call about a man with a gun, with a very specific description. A foot chase ensued. The individual fled. He turned around, fired upon police. The police returned fire. He was hit. I believe in the shoulder and is recovering from those injuries. I want to be very, very clear, this was not an unarmed juvenile as, unfortunately, being propagated on social media."

A reported asked the Mayor what specific conversations has she had with State's Attorney Kim Foxx about prosecuting looters.

"This is an ongoing conversation with them. We value our partnership with the State's Attorney. We value our partnership with the courts. But this is an instance where we have to have a comprehensive, all-hands-on-deck strategy. Our police officers put themselves at great risk last night. Literally they were being fired upon, as they were working to stop the looters. That can't be a circumstance that goes unchecked. So we have been in conversation with the State's Attorney. I have not yet had the opportunity to reach out to Chief Judge Evans...but we will. Our staffs are in conversation," Lightfoot said.

"We've got to make sure that, if the evidence supports it, these individuals are fully held accountable. And that work is ongoing to identify those suspects. We got a lot of great footage from last night, and I want to assure residents of this city we are not taking this lightly."

She won't go into detail on conversations with Kim Foxx.

Reporter: Illinois GOP leader Jim Durkin is calling for the National Guard and any federal help to help Chicago. Despite your misgivings and tussles with President Trump, should Chicago take him up on his offer for additional federal resources?

The Mayor said she spoke with Governor Pritzker early Monday morning to brief him on what happened.

"Both of us believe this is not an incident that requires the National Guard. In the event we need additional resources, we will. We worked hand and glove, and well, with state police. They were with us last night. Those additional resources are available. We're not going to spare resources if we need them, but we want to make sure that we're prudent in the resources we need. And, again, no: We do not need federal troops in Chicago. Period. Full stop. I'm sure the President will have his way with this incident. But I am calling upon him to do the things we do need. We need commonsense gun control. We cannot continue to have circumstances where anyone and their brother can go across the border or other parts of Illinois and bring illegal guns into the city of Chicago. That is something that the federal government is uniquely qualified to handle and we need the President to step up and do that. We need to make sure the ATF has adequate resources to actually do checks on gun dealers who are selling guns to straw purchases...Again, strengthening the laws so we can do effective oversight of gun dealers," she said.

Mayor Lightfoot said the city is monitoring social media for signs of unrest or plans for retaliation, which is how they saw the plans for looting on Sunday night into Monday morning.