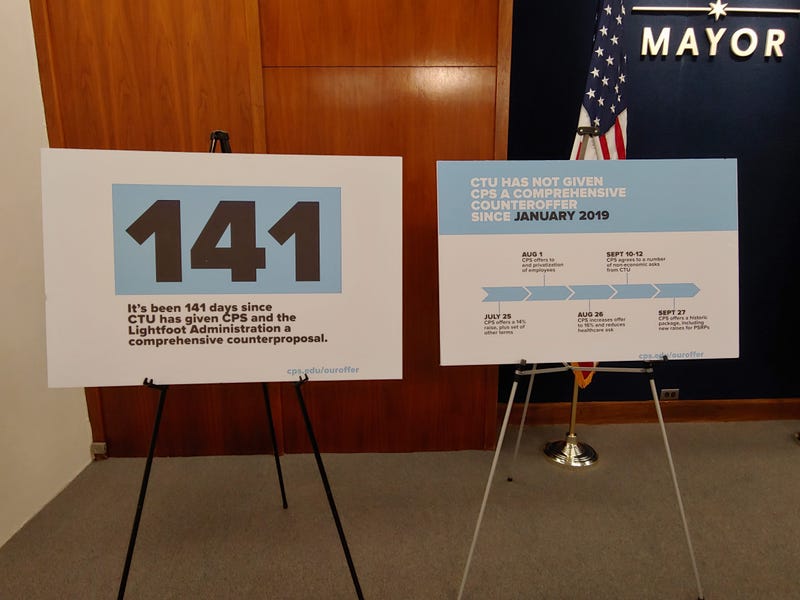 CHICAGO (WBBM NEWSRAIO) -- Mayor Lori Lightfoot says the Chicago Teachers Union appears to be more interested in preparing for a strike than trying to avoid one.

The two sides are far apart as the Oct. 17 strike date looms.

The mayor said they really only have a week from tomorrow to reach a deal because the union's membership must approve it.

At a morning press conference at city hall, Lightfoot called the district's proposal "the best offer provided to CTU in its history."

"Since our team has submitted that offer, totaling about 50 pages in material we have received nothing from CTU until this Friday; we got five sheets of paper," Lightfoot said.

“Fifty pages of counter-proposals from the Board means they’re watering down what we’re trying to win for our students,” said Robin Blake Boose, a teacher at Ashe Elementary School. “It doesn’t take more than a sentence to say, ‘Put your promise in writing.’”

One billion dollars in new money from the state is not being spent in classrooms, the union says and the district's proposal is still vastly inadequate.

CTU specifies class size, bilingual ed and support staff levels as areas where its bargaining team is standing firm in a press release that said the Board has stalled and stonewalled more than bargained in negotiations.