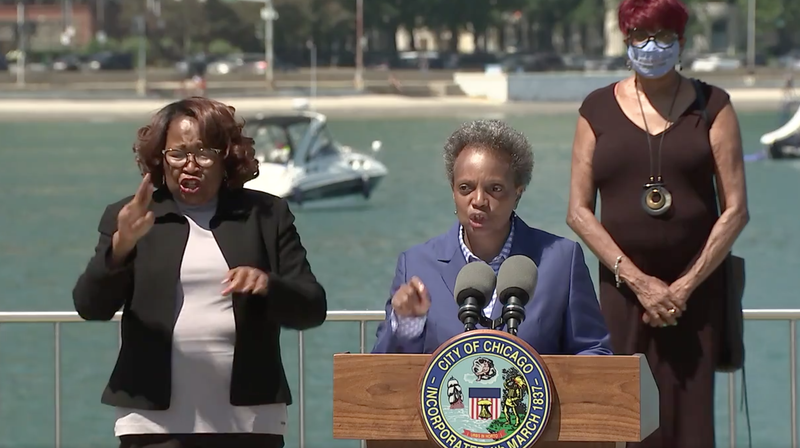 "As you all know, earlier this summer, our city experienced looting and destruction at a level we haven't seen in, really, half a century, going back to the 1960s; costing our businesses millions of dollars in damages and undermining our recovery from COVID-19, and shaking the confidence of residents who are already under duress because of the virus and the related negative impact on our economy and jobs, placing incredible pressure on the men and women of our police department," Lightfoot began Friday's news conference.

"All of which flowing from this criminal activity is totally totally unacceptable. In the days and weeks that followed, those same residents and businesses have been working together, diligently and courageously, to rebuild, to reopen, and get back on their feet. And that's exactly what they were doing, and then earlier this week, when we experienced one again criminal looting and destruction in parts of downtown, Near North, and commercial corridors, in neighborhoods like Bronzeville and West Garfield Park and the Near North Side. Once again destroying property, undermining our recovery, and undermining residents and businesses sense of safety and uncertainty about the future."

The businesses impacted during this week's unrest weren't just national chains and high-end retailers, she said. They were our small, family- and locally-owned businesses.

"Whether its downtown commercial district or one of our other 77 neighborhoods, there can never be any place in Chicago where businesses are afraid to open, where residents and visitors are afraid to travel and shop, or where employees are afraid to go to work," Lightfoot said.

The Mayor said her primary responsibility is to keep people safe in every neighborhood.

"Let me take head-on this narrative that if we protect the downtown we ignore the neighborhood. That is a completely false narrative for many reasons. First of all, we never take our eye off any area of our city that is in trouble or distress. And our downtown is more than just a collection of office buildings or retail stores. Streeterville, Old Town, River North, the Gold Coast - these are neighborhoods, as well. Over 100,000 residents live in the downtown area. These residents, our neighbors have every right to experience the same thing that everyone in every neighborhood in Chicago wants: peace and safety.

"It tears me up when I hear from residents anywhere that they are afraid: afraid to leave their homes, afraid in their homes, afraid to go to to work, to go out for necessities or just to enjoy the beauty of this city," Lightfoot said. "Our residents, no matter where they live deserve to stay safe. Our businesses, no matter where they are situated, deserve to be secure for their owners, their employees, and their property. And our police officers deserve to be able to do their job without the threat and reality of violence visited against them."

Despite precautions put in place based upon lessons learned in late May and early June, the Mayor said, "what happened Sunday night and then into Monday morning should never have happened. We, our city government with our law enforcement partners, simply must do better. And we will do better. This challenge that we face goes beyond just broken windows and stolen property. What was damaged was the faith and confidence of our residents and businesses in their city's ability to ensure basic protection. The effort to restore that confidence has already begun. And for me, personally, it started with listening. Listening to the fears, concerns, and frustrations of many people, who have communicated with me directly, either because they reached out to me directly or I to them."

The Mayor said should be obvious, "but let me say this loud and clear: No matter what an individual's life circumstances may be, it is never justifiable to take that which is not yours. We teach that basic, basic tenant of our democracy to our children, and any thinking, any speech, any action that suggests that somehow taking and looting is justifiable is simply wrong and I reject it in the strongest words possible."

The Mayor, along with law enforcement, business leaders, fellow elected officials, and the faith community, said in one clear voice: "we are united and collaborating and pulling our resources against this effort of criminal conduct to create chaos and fear in our city. This effort extends beyond our city government..." as they announced a comprehensive plan to protect city businesses, communities, and residents.

"This is a plan for every part of our city, with emphasis on our commercial corridors, downtown and in our neighborhoods," Lightfoot said. "...This plan is built on five core strategies, compromising 10 specific tactics, each focused around our central objective of protecting our city's commercial and neighborhood businesses from any future looting attempts while continuing to prioritize the safety of our residents and communities."

The Mayor said the strategies are as follows:

Enhanced use of technology and data analytics

"We must be better at preventing these crimes from happening in the first place, and as we have seen over these past few months, social media platforms have been repeatedly used to organize large groups of people to engage in illegal activity," Lightfoot said.

For that reason, she said, the Chicago Police Department has created the Social Media Task Force, a specialized, 20-person unit within the Crime, Prevention & Information Center, "focused on around-the-clock review of open-source social media activity — all open source, publicly available, that might indicate plans for looting."

"This is important to ensure complete transparency in the event of a police-involved shooting or other incident, no excuses," Lightfoot said.

"Should we learn of any planned looting, CPD officers from impacted districts will be deployed immediately, along with members of the police department's Critical Response Team and Community Safety Team," Lightfoot said.

Additionally, other city resources, such as Streets and Sanitation vehicles will continue to be mobilized to assist CPD in maintaining control over impacted areas.

These resource deployments will ensure CPD has adequate coverage to protect businesses.

"We are working alongside the community with the common goal of keeping our neighborhoods and residents safe," said Superintendent Brown. "This cannot be done by CPD alone and we must all stand against criminal and destructive behavior that is not only illegal, but is an attack on our city."

CPD will actively partner with city agencies "to deploy new and enhanced tactics to shut down targeted areas," Lightfoot said, in the event of looting; that includes blocking/disabling vehicles, creating new things like bollards to limit movement.

The framework will accelerate contact between CPD and the business community, allowing CPD to react faster and communicate effectively to businesses impacted by emergency updates, including stores, businesses, and local chambers of commerce.

"If you have not signed up yet for the CHIBIZ alerts, please go to the website at OEMC and do so. We have over 8,000 businesses that have signed up since we activated this app back in June. We need everyone and every business across this city to step up and sign up for these alerts, so we can keep you in the loop, when anything is happening in your area," she said. "Recognizing that community safety is a shared goal and responsibility, we will be creating stronger community partnerships. This will include CPD Community  Policing Unit, building greater partnerships with community leaders to keep our city safe from looting and destruction and other acts of criminal activity, specifically CPD will be partnering with community leaders who can use their voice to speak out against looting, as well as engage in proactive conversations with businesses and communities," Lightfoot said.

"We need to lean into community leaders, particularly our street outreach/intervention partners and continue to rely upon them and make sure they get the support that they need."

"To start, the city is underway to consider new laws and regulations and enforcement that will provide CPD greater flexibility in prosecuting cases," the Mayor said.

The city will strengthen relationships with the State's Attorney Office, state police and Cook County Sheriff's Office, as well as federal partners.

The state police will be deployed to shut down access to targeted areas of Chicago, while sheriffs will go to neighborhoods to assist with violence reduction efforts, Lightfoot said.

The robust legal action also include the Detective Task Force on Looting created with the FBI.

"This special task force will ensure special handling of looting cases to ensure those who engage in it are held accountable. No one should ever feel they can break into our businesses, destroy and steal property, and get away with it." The task force "has already been hard at work this week" looking at video footage and IDing people and developing "strong cases" against them. It's resulted in 40+ felony charges, Mayor Lightfoot said.

Special Agent in Charge Emmerson Buie, Jr., Chicago Office of the FBI said "violent acts, threats to life, and the organized destruction of property interfere with the rights and safety of peaceful demonstrators and all other citizens. The FBI is committed to working with our community and law enforcement partners to protect the American people and ensure that violent individuals and groups are brought to justice."

"We cannot allow the short-term setback that occurred this week to distract us from our broader mission of delivering the resources and investment across our communities that are desperately needed..." Lightfoot said. "What we experienced this week is simply not who we are as a city, and we will never allow anyone to destroy the fabric of our city and our pride that we rightfully have as Chicagoans."

She wants people who were afraid after this week "to know that I hear you loud and clear. You deserve to feel safe. And I am working night and day to make that a reality for your and residents all across our city."

Over the weekend, OEMC will continue to ensure residents have the latest information on any restricted access to the downtown area. To receive emergency alerts for updates on street closures and public transportation, subscribe to Chicago’s text or email alert system at NotifyChicago.org or follow OEMC on Facebook and Twitter @ChicagoOEMC.