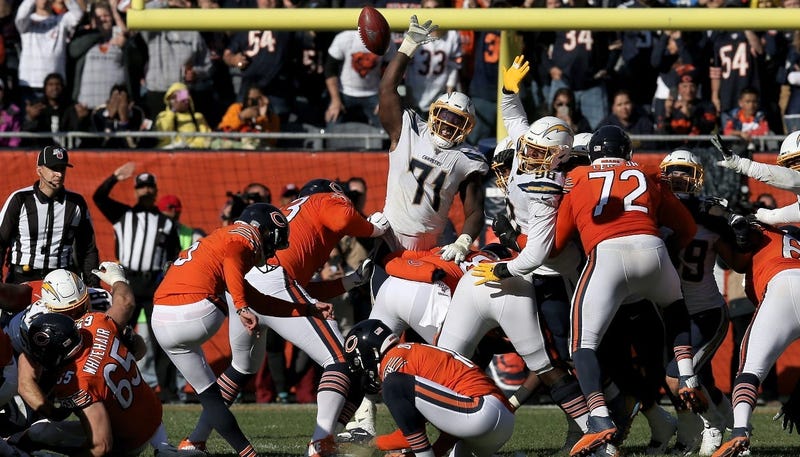 LAKE FOREST, Ill. (670 The Score) -- Bears coach Matt Nagy was vague Wednesday when pressed about the details of the setup of kicker Eddy Pineiro's failed game-winning 41-yard field-goal attempt as time expired in a 17-16 loss to the Chargers on Sunday.

Pineiro missed wide left on a kick from the left hash mark, which was a location that he didn't prefer, he said Tuesday. Prior to the kick, Nagy had directed quarterback Mitchell Trubisky to take a knee at the left hash mark on a first-down play with 43 seconds left. The Bears then ran the clock down to four seconds to set Pineiro up into a right-to-left a crosswind in the north end zone of Soldier Field.

Nagy was asked about Pineiro's preference directly at Halas Hall on Wednesday, but he didn't provide a clear explanation as to why the Bears didn't set Pineiro up how he preferred. Instead, Nagy expressed confidence in the "communication" that took place.

"We just felt like in that situation, where we were, we're good to go," Nagy said. "Eddy knows, and I think he said it, he’s knows he's got to make make that kick. We all felt that. There was a trust factor there, too. None of that got lost. We have ultimate trust that the next time that happens and we get in that situation, he’s going to make it.

"There's a lot of communication that goes on. That’s what we did. And we felt good when that kick went up from that distance. We felt really good that he was going to make it. And so did Eddy. He didn’t make it. And again, I lost zero trust in him as a kicker and if we get into that situation again, he’s going to nail it."

Asked if he received information in real time about Pineiro's preference from special teams coordinator Chris Tabor or Pineiro himself, Nagy responded, "We have a communication process that we believe in that we use."

The decision to take a knee came after Trubisky scrambled for 11 yards to move the Bears to the Chargers' 21-yard line. That run came after a timeout called by the Chargers, during which Nagy, Trubisky and the offense planned for the end-game scenarios.

"Whatever he needs me to do, I do," Trubisky said of his role in taking a knee.

During the first quarter Sunday, Pineiro missed a 33-yard field-goal attempt off the right upright at the same north end zone. He hit three field goals in the second quarter, with those makes coming from 22, 25 and 19 yards, respectively.

The Bears named Pineiro their kicker at the start of the regular season after an exhaustive search to address the position. They held a number of tryouts during the offseason to find a replacement for Cody Parkey, who was released in March after a turbulent 2018 season in Chicago.

Pineiro is 12-for-15 on field-goal attempts this season. That includes a game-winning 53-yard field goal as time expired in Denver on Sept. 15.