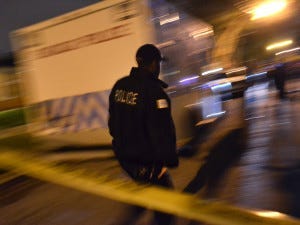 CHICAGO (WBBM NEWSRADIO) -- At least three people were murdered and nine others were wounded this weekend in citywide shootings.

The city’s latest reported shooting killed a 21-year-old man in the Clearing neighborhood on the Southwest Side.

A 21-year-old man was in an alley with two other males when they began arguing and one of the males fired shots at him at 10:22 p.m. in the 6000 block of West 63rd Street, according to Chicago police. He was shot in the head and pronounced dead at the scene, police said. The Cook County Medical Examiner’s Office did not immediately confirm the man’s death.

A woman sat on the ground crying as a man embraced her.

A Saturday night shooting left 22-year-old Daniel L. Erskin dead inside a hallway after he violated a protection order in the Englewood neighborhood on the South Side, according to Chicago police and the Cook County medical examiner’s office. At 11:44 p.m., the 22-year-old was wounded by a 52-year-old woman on the second floor of an apartment building in the 1400 block of West 71st Street. A bullet entered his left shoulder, and he was pronounced dead at University of Chicago Medical Center.

That afternoon, 21-year-old Christian A. Robinson was killed and another man was wounded in a shooting in the Noble Square neighborhood on the North Side. They were sitting in their vehicle when a vehicle they did not recognize pulled up and someone inside fired shots about 3:20 p.m. in the 1200 block of North Ada Street, police said. Both men were shot multiple times in their upper bodies, the younger man fatally.

In nonfatal shootings, a man was shot while driving Saturday night in the Little Village neighborhood on the Southwest Side. The 29-year-old was driving east at 8:28 p.m. in the 2800 block of West Cermak Road when he saw a black car approach his vehicle, police said. He then heard a loud noise and felt pain in his leg.

Two men were wounded by gunfire Friday evening in the Hermosa neighborhood on the Northwest Side.

The men, ages 49 and 60, were looking into a possible burglary at a building in the 4500 block of West Palmer Street when someone began shooting at them, police said. The 69-year-old was hit in the shin and the other man grazed in the thigh.

At least eight people were shot, two fatally, in Chicago on Saturday. Six people were wounded in shootings on Friday. On Sunday, only the one fatal shooting was reported over a 24-hour period throughout the city.

Over the extended New Year’s holiday weekend, at least two people were killed and 27 others were wounded in citywide shootings.